Roundbound: Gaining for a Goddess [v4.2] 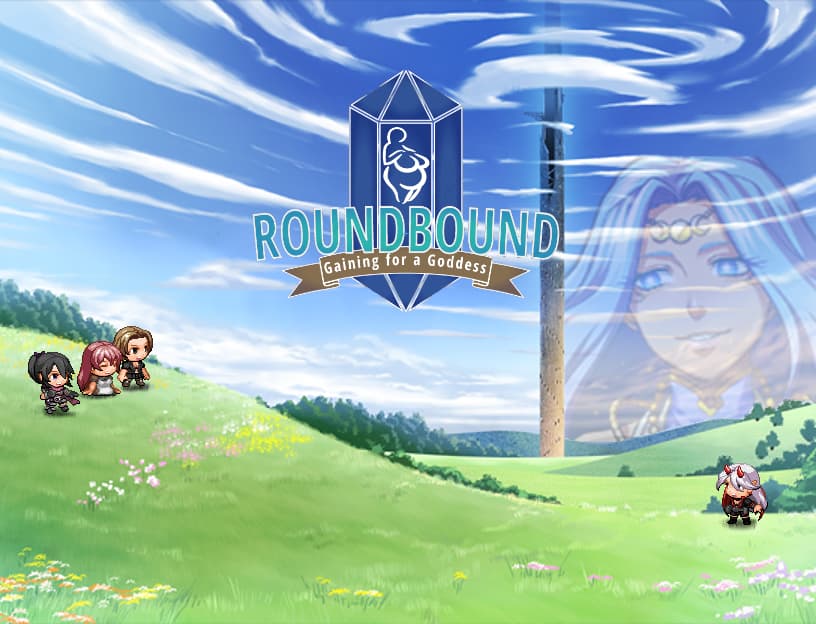 One day, Robin was visited in a dream by the Goddess of Gluttony, Aria. She told Robin she was dying- and the only way to bring her back to her former health was to go across the world of Demarara to fatten up as many people as she could. It was there Robin gained a strange blessing, one that enabled rapid weight gain in not only herself but anyone she fed. Go on an adventure with Robin across a strange yet charming land as she encounters dragons, ghosts, demons, bandits, and many other challenges as everyone around her starts to rapidly gain weight. Will Robin end up helping Aria, or will the weight of her own blessing immobilize her and her party? 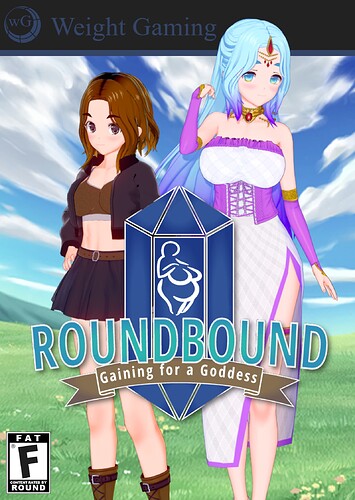 I just want to give a special thanks to some people for getting this update out. Specifically my friends CJ, Erron, Choak, Slipstream, and the Stuffing RPG server. They all helped the game out in one way or another and really helped to keep me going through development.

One final thing- I am looking for artists to help out with some bad ending scenes! If you can do, or know anyone who can make some art for the bad endings, any help would be more than appreciated

Join the The Roundbound-Cord Discord Server!

Check out the The Roundbound-Cord community on Discord - hang out with 257 other members and enjoy free voice and text chat.

loving this so far. but there seems to be a problem with the bunny suit girl in the first inn 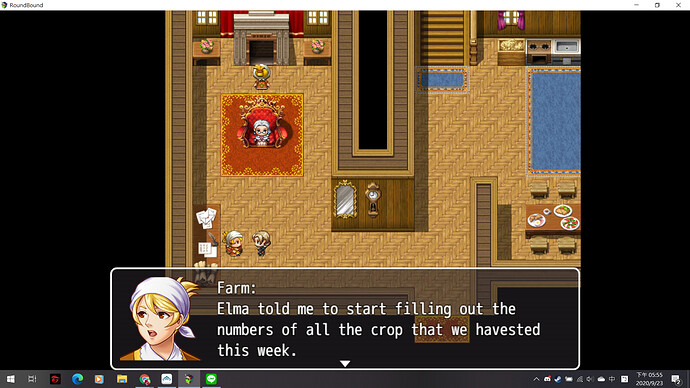 There are a whole lot of typos all over the game, but I didn’t fuss about them too much because that is fairly typical for the genre. The combat of the game isn’t tedious after you get Robin’s Dual Attack, which is nice. On the downside, the various weight levels don’t seem to do anything in combat. Being stuffed repeatedly seems like it should have some downside or permanent-ish effect, in my opinion. On the upsides, I enjoyed being able to do a variety of quests and get a lot of people fatter, which was fun.

Bug wise: Robin oddly cannot wear chainmail armor but Clare can. This seems like it should be reversed since Robin seems to be a warrior archetype.

Balance wise: Consider replacing Static Spear with a 3 all-enemy Ice Pellet for Clare on level 7 maybe? I never got to use Meditate so it seems like a dead skill. Robin’s Pitch Rock also didn’t get much use because Dual Attack was just far better to use pretty much every time (though since it was a process of you learning how to use stuff, it makes sense in being something that you were just feeling out how to do it maybe?)

This is very nice for practice, thanks for sharing!

I’m impressed with a first release like this. There are certainly a few typos here and there (surprised doesn’t have a z in it, for instance) but otherwise it looks quite promising.

I’ve also apparently got the maturity of a child as this typo made me giggle.

Shoulder Bash seems a bit underwhelming, it looks like it does the same damage as a normal attack. 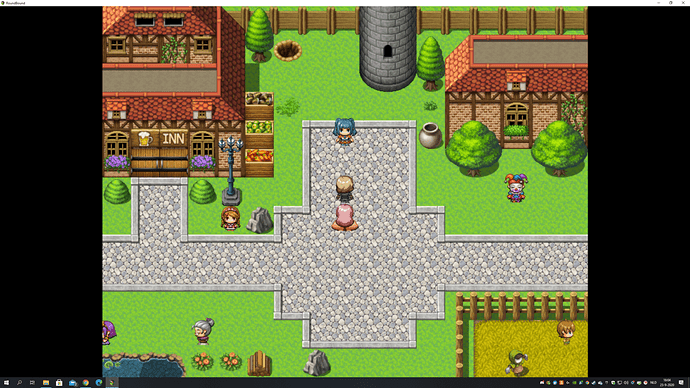 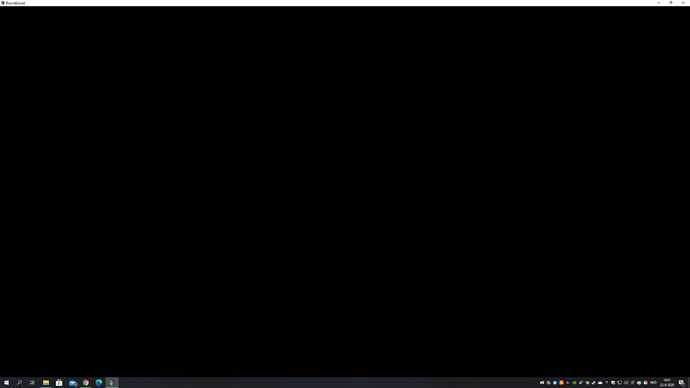 I enjoyed the demo.
The bunny girl is bugged. Screen fades out but stays faded.
Couple of typos but those aren’t a big deal honestly speaking.
I’m assuming being fat will provide benefits or detriments down the line? Otherwise I don’t see a reason for the weight loss crystals if it’s only a graphical thing.

Also if you go to the merc tent and eat the food, if Clare was super stuffed from the eating contest, she actually reverts a weight stage to chubby.

Otherwise, it’s a really good start. Keen to see it fleshed our further.

Thanks for the feedback, I’ll try to go and fix the bugs in the game- they seem to be pretty easy fixes.

Also thanks for pointing out the typos- RPGMaker doesn’t have any spell check and I chicken peck the keyboard when I type so I often fuck up words. I’m planning on just using google docs or something to draft all the dialogue in the future.

Game’s looking good so far, premise is good, dialogue doesn’t drag, and the play has been pretty fun, save for the chocolate girl and beer bread bunny black screens.
Hope it goes well in the fixing, and for future content.

Hi, just wantet to say that I really love this game so far!
Keep up the good work! ^^

Whenever I see a game where I am given a chance to fatten up other people, I have a big smile on my face.

I will be keeping a -very- close eye on this game!

With the bunny girl i got the same a blackscreen

From a tech level, i only black screened on the chocolate coin girl.

From a story level, please continue this, this has quite alot of potential to it.

Finally, a Baltimore hon is represented in fetish gaming!

I have to say this is not a bad start I do like the idea of the game that by helping the goddess the world will slowly get fatter but it would be a good idea to have on the menu away to keep track of your quests.

Love the game! There are plenty of typos, but you probably know that already. It’s a little awkward that Clare loses weight to become chubby if she eats in the tent after the eating contest, but that might just be a limitation of the game design. The combat at the beginning of the game is very slow; I suggest either increasing Robin’s attack power or lowering the HP of Slimes, because they take far too many hits. The problem pretty much ends once Clare joins the party, though. I’m not sure if this was intended, but the fact that Robin can’t equip the chainmail feels weird to me. Those minor things aside, though, this is a great start! You have a knack for writing fun dialogue, and both of the party members are interesting characters. Sure, it’s sort of the typical ‘loves big girls’ and ‘loves to eat’ pair, but I’m always down to see more of that!

so about the black screen at the chocolate girl and bunny girl, there’s a way to fix them actually, if you don’t move and press use again the event finishes properly, I’m guessing you forgot to have an event lead into another, also I agree that I think the weight levels should be more than just ascetic, like give us new abilities, or different dialogue, I know that would be a lot of work, but I’m just suggesting stuff here, overall I did like it, I also liked how there are plenty of signs that we are getting more party members

I just tested this myself, and I found out that this only works if you use the Z key to advance the dialogue. If you use the left mouse button, as I often prefer to do in RPG Maker games, the scene gets stuck. Pressing Z or Enter does nothing, but I can still open the menu and return to the title screen.