it’s been a bit but wasn’t it lardgolem or did they change it? you’re talking about the white one that has a fatten attack right?

yes,that is the one im talking about

Thanks,but do you know the ones for the slimes?
The ones from the capsule pods mod

I assume you’re referring to the slimes found over here in this topic: Starbound Big Fatties Add-Ons - Expanding Clothes and other small additions - #2 by Tobias1595

They provided the means to spawn them manually just a bit under the download link, here’s the section in particular:

The internal names are jellyslimemini , jellyslimenormal and jellyslimebig . To spawn them in, you use /spawnmonster , the same command as for other monsters aswell.
There sadly is no way to spawn multiple at once.

I have another mod idea for BF: The ability to bump anyone (NPCs, players, enemies, etc.) with the player’s fat body.

I’ve seen this question several times now, and while I certainly can’t speak for everyone who has worked on BF-compatablity for modded races, I can really only suggest not expecting too many people to put in that extra work for that particular addon.

Make no mistake, it’s a great mod for people who want to reach a more ideal weight range between the base sizes that exist from the main mod, but it also nearly doubles the workload by requiring even more spritework from creators. Considering that plenty of races also still have missing base sizes, with many more missing stuffed/filled variants - something I only JUST recently remedied for one I worked on - I definitely wouldn’t get my hopes up for more additions, but neither will I attempt to say that it’ll never get updated either, just very slowly more than likely.

…but hey, maybe I’ll consider adding granular sizes to any races’s fat sprites I work on in the future, it’ll make for some good practice at the very least!

hey if I can ask could there be a adaptation to this race?

looks slimier to a race in FU but very different lore. a lot more about souls and stuff so maybe to text about the weight could be linked with that?

i dont know how to do the coding to make a race compatible, but you could use the weight models from the other compatible shadow race in the modfattiesraces file

how? I have not art or programming experience

I dont know how either, sorry. but i do know that if you download the Wardrobe mod and spawn yourself the Dark disguise shirt and pants, they should match your head

may i request an adaptation for the kobold race? 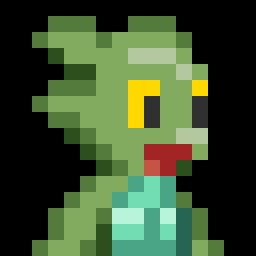 I still say this mod need to bloody fix the npcs having fattening weapons. I so sick of any real battle being only fat guns I removed the mod lower the odds for freaks sake

Feedback is great but you have no reason to be so rude, nothing stops you from looking up how to mod starbound yourself and fixing it. The script of the mod being enabled or not is run inside of the player so there isn’t a way to have that change whether enemies spawn with the weapons or not and enemy weapon spawns don’t have any weighting system to make precise adjustments to how often they will spawn with certain weapons. Yea it was one of the first things I experimented with when modding starbound so no duh it isn’t done great but if you’re just gonna complain do it yourself.

ok like you said I could have been politer. But I also recall saying this months ago and getting no response would weaken my desire to be polite but thats not much of a excuse. though of course I never Insulted the mod only said a area it could use improvement just not in a polite way

Thanks for the apology, now for more precise feedback what % of the time do you think enemies should spawn with the fattening weapons? I did have one potential idea for how to change the spawn rates somewhat.

honestly… I been more thinking why not have a type of foe that uses them. like a fat cultist has the fat rifle or whatever. while normal thine would be using normal.
but for a percentage… around 15 to 25% maybe? in small numbers it adds to the threat since it slows a player and messes them up for the lethal weapons