Set in a world where belly-idols are constantly trying to eat more and grow larger, we follow the story of Amy and Emily as they set out to climb the stairs to stardom! The entertainment industry has found new ways to capitalize off of the growing figures of the general population through televising eating contests, casting actors with… larger bodies, and now with their latest endeavor, bringing talented belly-idols into the spotlight! Now, take part in the adventures of a duo hungry for fame and fortune in:

The Next Big Thing

Our story follows the adventures of Amy and Emily, who enroll in an academy specializing in teaching girls how to become belly-idols! Join them in their day-to-day life as they train to reach new heights and capacities in this bizarre career that has emerged from this new society!

Featuring rhythm-based battles, a rich story filled with stuffing and weight gain side quests, as well as a host of characters illustrated by artists such as Hero-After-Dark, baqua, and ee8k, there’s plenty more to come as the game continues to be updated! 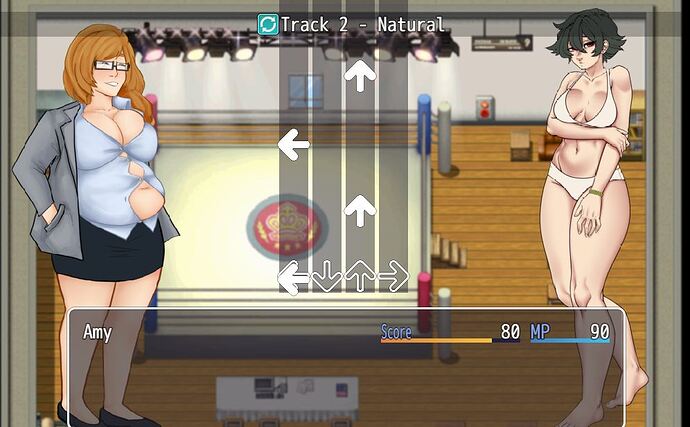 Currently looking for artists!
If you’d like to help out with art assets, that would be amazing! If you think that you can deliver work on a schedule (and have time slots available for a lot of assets) I’d also be more than happy to commission art from you!

This game is very much still in very early stages of development, and ideas for fleshing out the world such as side quests, locations, etc. would all be very helpful! I am but one person, and as much as I like to dream up new ideas, my imagination can only stretch so far lol

Please let me know what you think, every idea or criticism goes far in helping to develop and flesh out (pun intended) a game like this.

62 Likes
A user maintained list of games
Are there any RPG Maker games with art in them?
Hello im new
Anyone know some good rpg maker games with no combat in it?
moonslashx July 21, 2021, 7:25am #2

Been watching this dude make the game and he clearly has what it takes. Definitely keep an eye on this one!

This sounds kickass! Looking forward to see what comes of it and willing to offer any ideas once I see a bit of the concept

This sounds awesome. Very keen to see how it develops!

Huh. Didn’t know a rhythm game in rpgmaker was even possible. It’ll definitely be interesting to see where this ends up!

Thanks for all the kind words everyone! Progress has been going quite well, here’s a look at some of the maps I’ve made so far!

Congrats on getting the artist! Your game has a bright future for sure my dude.

This release has no fetish content in it, it’s just a tech demo showcasing the rhythm-based combat system. Currently, there’s one tutorial battle implemented, as well as some world-building introduction. Any feedback about how this game runs, and whether the button timings stay accurate on slower computers would be very helpful to me!

This release was started and completed in just 5 days, so there’s bound to be some rough edges on it. I’ll continue developing at the same pace that I’ve been working at over the past 5 days, and hope to have another release ready within a couple of weeks.

It’s cool to see some non-default maps, did you get the set on humblebundle? Interesting premise for a game, works as a good setup to the stepmania battles.

For the two girls jumping back and forth between the fence, if you stand on their spot, they’ll clip into you rather than get blocked. Only other rough edge was needing to hit interact to go through some door transitions.

Thanks for the feedback! I knew about the door transitions, just didn’t get around to fixing them because I wanted to just bust out the tech demo by the 25th. Will have to add the dancing girls to the to-fix list.

The rhythm-game works fine as far as I could tell, no issues there. I really look forward to the full game!

Very interesting concept. I am one who loathes the rpg battle system’s in alot of games. It feels like the combat more often than not gets designed too shallow to keep it interesting, and not be tedious. But this is nice to see something rhythm based. Worked well with no issues, keep up the good work.

Same here, I’ve always found most implementations of battle in RPGs to be quite tedious to grind through, and they all get rather “samey”.

I’m hoping to have the rhythm battles serve as sort of “boss stages” at key points in the plotline, where the main characters advance through their training. The main game loop would then be working their way up to those boss battles through story events, potentially an implementation of other mini games that would reward gold based on performance. Have enough gold, as well as potentially some key items found through the story, and you’ll be able to challenge the next rhythm stage.

I’m still worried that the plan I have would get too grindy, so still looking at ways to keep the core gameplay loop engaging!

This is a nice idea and I like to see how this world works and if you add a crazy characters that you have to fight like an Saturday morning cartoon it be super fun also the Rhythm-game adds a good change to the Normal RPG idea is and works in this world, it just I am not good with rhythm-games but I still love to see where this is going.

Thanks for the comments! The rhythm battles should be pretty forgiving, I’ll most likely make an easy and normal mode, where the easy mode battles are basically impossible to lose unless you miss more than 75% of the notes haha

I’m glad people are liking the new take on battles, and hopefully I’ll be able to get it integrated even better into the storyline through minigames that the main characters are able to do throughout their days training.

Cool, was gonna ask for an easy mode since I’m hopelessly bad at these sorts of rhythm games even after playing quite a lot of them.

Not a big fan of rhythm games myself, but will admit it was pretty fun. Definitely better than button mashing your way through battles.

Thanks for the kind words! After speedrunning the development of this first release, I think map-making has been the most enjoyable part of this whole process.

Progress is being made pretty fast on the game content, so here’s an update on what the roadmap will look like:

In other news Hero-After-Dark will also be making art assets for this game, but we’re still looking for artists! There’s quite a number of assets that are needed per-character in the game, so the more people making art for the game, the faster I can develop and flesh out more days in-game! So if you know of any artists still accepting commissions, please let me know (i’ve basically messaged every single artist i know of, please i’m desparate).