fixed version no more geting stuck and visible (you got hit!) effect : https://drive.google.com/open?id=1wsHeHtQlfLlgx32LFDfU3QLpqcoF7iYL 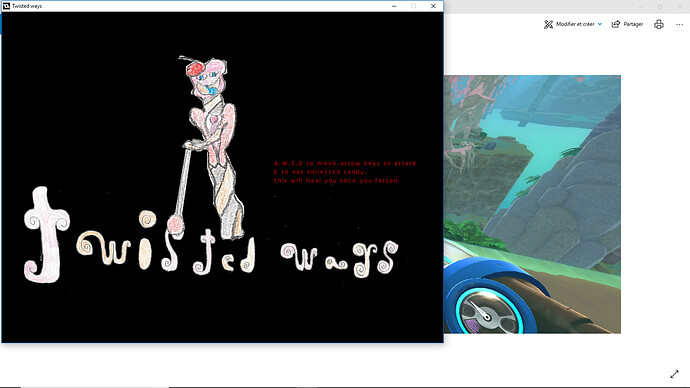 A lone soul, lost between world,
stuck here in it’s darkest sour.
The grim sweetner told her,
how to reverse her end, so bitter.
Go to my realm,
feast with no ends,
on my magical sweets.
But beware the second death,
for it is not neat,
and your mass he shall mess!

Here is a game similar to binding of isaac, with an attempt at drawing all the art assets!

Visuals
All the art include drawing, scanning, croping, adding to the game and making sure that its scaled well. But alas if i had more time i would have improved the assets by making actual animations. 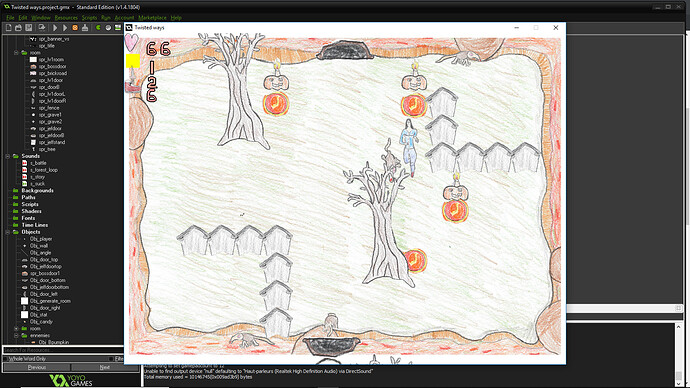 image1600×900 633 KB
gameplay
go around, fight creepy crawlies, eat small candies for mass (full heal, more damage and sprite change)
Or use one of the multiple(15) special candies of the grim sweetner for a stat boost or maybe an attack modifier! At the end stands the boss, ready to eat you whole! 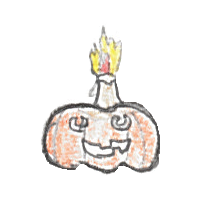 Right away, I have one critique: There is not any clear feedback that the player is taking damage. The health number going down isn’t immediately obvious, if you haven’t played the game, previously, and I thought the pumpkin on the first screen was dropping pickups or something, at first.

Similarly, there isn’t anything stopping me from going off the screen at my own discretion.

Aside from those, the art style is neat and different, and I hope you can get the project set up well for the end of the contest!

I hope everyone will enjoy those changes!

It seems like there’s only one piece of food to collect. Also, what am I supposed to do at the boss? Confusion aside, I like the binding of isaac style levels.

well the candy corn was the regular drop for the fattening, but the « candy room » also give progress toward getting bigger. If i return on it i could make various basic candies for the the regular drops, but all other 15 candies are exclusive to the first top room after the start.

also, adding the same, on hit effect for the final boss when he is hurt could help the players figure if they actually are damaging him. (his eyes changes has you damage him (i did not had the time to make a custom health bar for him

they do. The title tells you exactly how to use the candy corn. By pressing E you eat one collected candy corn. to fully heal and gain bonus attack, you need to eat a bit of special candy and candy corn.
it increases by increment, did not have the time to show it to the players, but this could be added in the future.

the game closing once the boss is defeated is you potentially spamming the keys, since the event that closes the game is linked to the press on any key. Or the timer that was set before is screwed up and closes the game after a few seconds.This could be fixed by sending back the player to the menu by pressing a specific key instead.

Thanks for the info.

This is fun and charming with lots of potential for expansion! I love the vacuum-mouth mechanic on that pumpkin boss!

I really like the style x’D sure it’s not amazing,but it’s definetly original^^

An interesting rougelike game that uses paper prototyping for the assets. Also seems to put the maps together procedurally which is nice. Unfortunately, the game suffers from a lack of feedback to the player (I was unsure if I was hitting something most of the time) and I would have loved to see the weight gain mechanics explored in more depth.

Certainly appreciate a LoZ-esque game, and the handrawn assets are unique. Unfortunately, the game can be awkward at times in a way that detracts from my overall experience with it. The feedback from when you hit something vs getting hit is not really present, and its easy to get stuck on seemingly nothing when trying to weave through objects.

I really like this, it’s like the binding of issac but with Halloween and candy and fattening. it seems like it is an easily expandable game as well. I think the biggest thing that could use improvement is making it more clear when you are and aren’t hitting something. Adding things like on hit sounds effects and visual confirmation of damage would help tighten up the gameplay. Additionally it was unclear if i had to directly hit with the red square, or if an enemy could run into it an take damage? Clearing that up will help go a long way! Keep working on it!