A relatively simple farming game with character customization and both player and NPC weight gain. Still a work in progress, so there are some placeholder elements, very little dialogue, and potential bugs. Bug reporting is greatly appreciated! 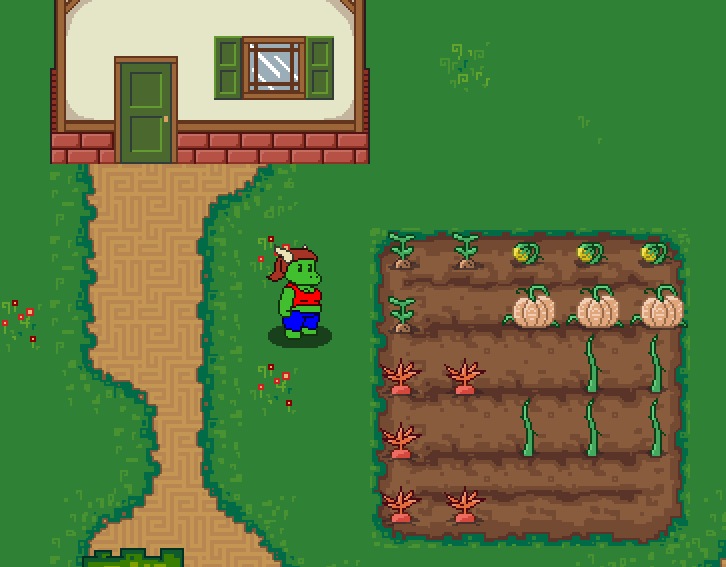 Controls:
WASD for movement
E to interact
I for inventory
M for map
P to enter planting mode
Esc for pause menu, where controls can be changed

Further tutorials are available by talking to Frank (next to the soil).

how do you gain weight

You didn’t mention a list of keys that are available to use when debug is enabled.

How do you plant stuff? I’ve tried dragging items out of the inventory by right clicking, but they just drop into the ground even when there are holes (or maybe it’s not added yet?)

Edit: Nevermind, stuff grows in the holes automatically without having to plant anything.

This looks promising! Everyone says they’re gonna do a fatty farm game but few have tried, glad to see some effort here.

For those wanting to know more particular controls:
WASD to move, P to go into Plant mode. While in plant mode, scroll your mousewheel up or down to change the kind of crop you’re planting, depending on its shape, then click to plant. You need to advance a day for the crop to grow. Press E to harvest, and you can hold down E to hoover up stuff on the ground.

so you can only gain weight by debug mode

Yup, right now this is more of a proof-of-concept than anything, so while the functionality is there I haven’t implemented anything that uses it yet.

Still as a concept it was pretty fun to play around with for about 30 minutes or so. Had to figure everything out first though.

In terms of the actual mechanics of the game, I don’t have anything planned for changes based on weight past what I already have, which is a veeeery slight speed decrease that comes with weight increases. most of the dynamic elements will probably be what dialogue/quests you see at not only your different weights, but at different NPC weights as well. This is mostly due to all the changes I could think of just being annoying to deal with, like super slow walk speed and trampling crops.

Very solid for a proof of concept! A suggestion I have is to incorporate a festival of some kind later in development. A opportunity for the player to get more cash for their crops (think Harvest Moon Grand Bazaar), buy gifts for NPCs, or partake in eating contests. Of course, calendar and day/night cycle need to be finished first…

But it looks very nice! I think this game is off to a good start.

Good news! The day/night cycle and calendar system are already in place, they just don’t have any UI elements at the moment.

Pretty well done for a game concept.
How fast are you planning to have the PC gaining weight? Will there be a stomach capacity limit that limits the amount of food you can consume at once?

I was envisioning a system where you could buy/trade for meals, with only one a day that you could eat, which would have a certain number of “calories” based on the meal. That coupled with a daily degradation of weight so in order to reach higher and higher weights you would have to eat higher and higher calorie meals. Hopefully that would give a nice adjustable weight, since I want to to have multiple seasons pass before you can get to the highest weight.

i tried it out and it looks great an feel great

New version up, this one doesn’t have too many groundbreaking changes in it, just a wardrobe so you don’t have to use debugging to change appearance. As such I’ve taken out appearance changes through the debug menu, but weight changes are still done through J and K after pressing 0.

The wardrobe itself is accessed through walking up to the front of it and pressing E, with WASD for options and mouse on the sliders at the bottom for colors. I messed up the draw order for the wardrobe so it always shows up at the front, but it’s just a placeholder. It’ll be a background object against a wall eventually.

Once you add more content into the game, will you be able to buy more clothing?

Yes, I’m planning on adding quite a few more outfits down the line. There are still plenty of systems I need to put in before I work on serious content expansion.

I found some bugs.
if you walk diagonally down against the house door you can walk past the loading zone
you can walk while talking to the NPCs
if you use the wardrobe and then go to the shop the text is misplaced (if you talk to the other guy it gets fixed)
in the wardrobe if you move the selection under the last option and press A or D the game crashes
edit: the day night cycle doesn’t seem to change the lighting but stuff grow normally

Another small update, this one is just finishing up the shop system and fixing the daylight cycle.

Still have to fix the text and wardrobe issues, but I think the wardrobe one should be easy to solve. I’m just going to make it so you can’t adjust color while in that option, it was throwing some garbage data in.