New year, new game! Well, kinda. I’ve been working on a near total revamp of my untitled farming game, and I think it’s in a state where I can start showing it to more people now. 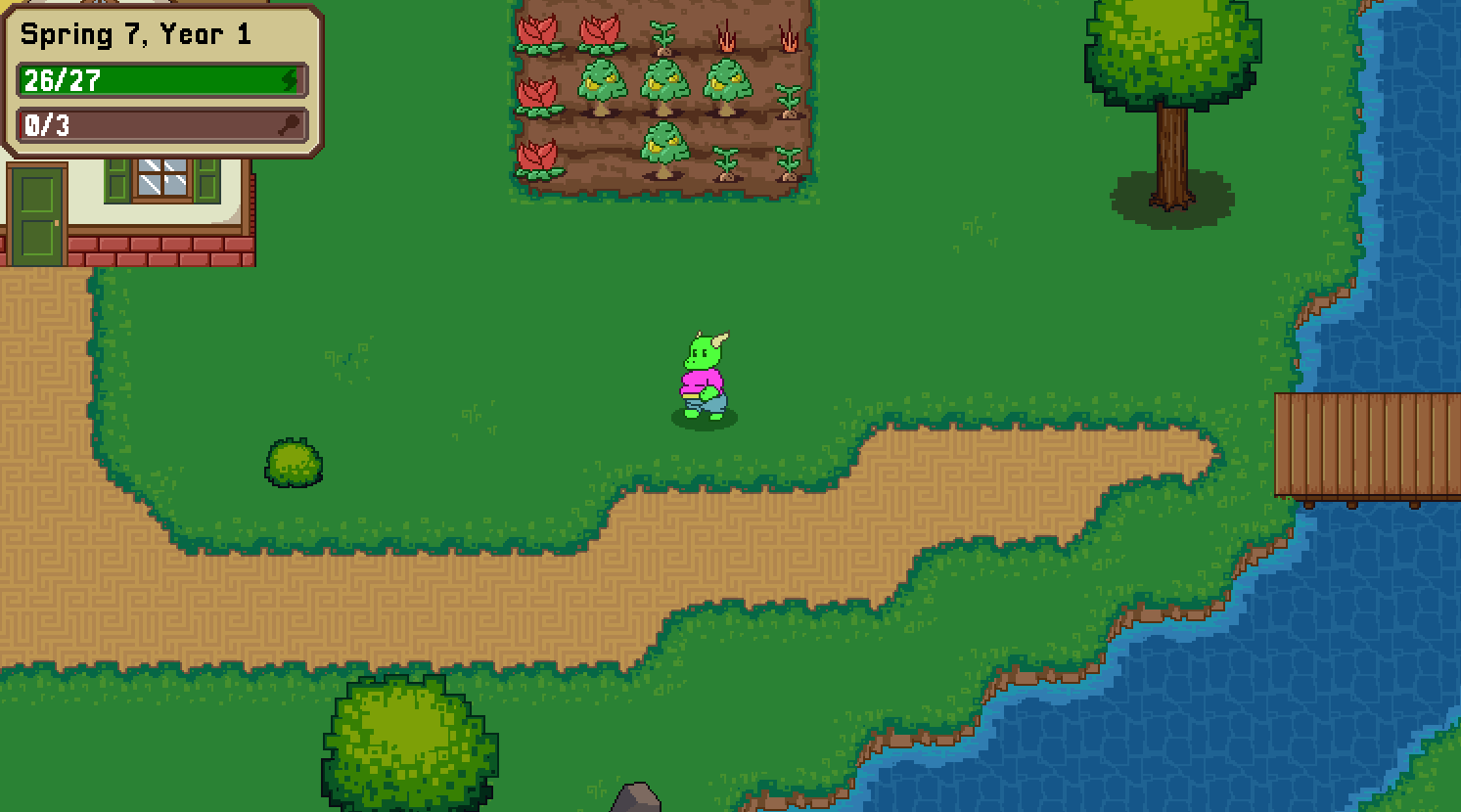 Besides a lot of backend stuff that was driving me mad, I’ve updated a few more noticeable things as well, such as:

-an actual name!
-new map
-no more real-time, the day continues until you go to bed, so the game can progress at whatever pace you like
-an energy and fullness system
-pretty much all menus have been changed to mouse controls
-shops/planting crops have been streamlined with the aforementioned mouse controls
-gifting is now available to all NPCs all the time (well once a day, but it’s not dialogue based anymore)
-new save system that should hopefully make it so I can add new quests/events and npcs without breaking people’s saves

This is still big WIP, but I feel like the whole thing is in a much better state than the untitled farming game, and is basically a whole different project even though all the assets are the same.

Bug reports are greatly appreciated, but to save time here’s a couple suggestions/features people are probably going to mention.

There will be more quests/events added as well, specific ideas for quests or events are welcome!

For the foreseeable future I will not be adding any more weight levels for the player (and by extension NPCs while they walk around) since each weight level is a couple hundred sprites I have to draw.

In that same vein adding in new clothes/body patterns is going to be super duper low on the priority list. New head stuff is a more likely though since the amount of work to add one of those is much lower.

I will not be adding any sort of debug/cheat mode that affects weight levels, time, events, or any NPCs. There’s just too many things that I would have to put in to make such a feature work smoothly, and I don’t want to have to address a bunch of “bugs” from that. If you really want to make things go faster just edit your save file to give you a million dollars or something, but if you do end up editing your save file please don’t submit bug reports from that file.

Is there any particular reason why I am able to drag around the Buying/selling screen? It caught me so off-guard that I accidentally bought ten rotato seeds. I was going to do that anyway, but it seemed like such a strange inclusion.

Thoughts: The town is a little empty right now, there are large empty patches where there is essentially nothing and some things are spaced quite far apart. Fortunately nothing is off the beaten path. That said, nothing feels particularily like it’s a “port” of any kind, the most there is at the moment is a small wooden jetty. But I do like the idea that different ships come in every once in a while to buy and sell things for better prices than the shops (or something like that, we can workshop it).

Got the following error after selling a stack of 5 meatroot to the grumpy frog:

Besides that, I think switching away from realtime time-passage was for the better. Looking forward to seeing how the game evolves from here!

Is there any particular reason why I am able to drag around the Buying/selling screen?

All the things that contain items are in the same category, so they all share the trait of being able to be moved around. Probably going to change that for the shops so you can click and hold to buy stuff quickly.

The town is a little empty right now

Yup, still a lot smaller than the whole map from the previous version, but plenty of room to put more stuff if need be, and now that I have a more solid direction I can put in stuff like a better dock and a boat.

Literally four different buttons to do the exact same thing on different menus but only one works for each.

The only function of the inventory button is for the inventory, not much I can do about that since I don’t want the inventory to close every time you interact with someone. Same with the pause menu, gotta have a separate key so the functions don’t interfere with each other, plus you can click the resume button to continue the game as well. Also you can use the interact button to exit the customization menu on new game, you only have to use enter for the name entering menu because otherwise you just wouldn’t be able to put E (or whatever key it’s assigned to) in your name. I might be able to make it so that both the inventory and interact key close shops though, though right now it technically closes the shop, just not the dialogue box, but that’s a cop-out.

Got the following error after selling a stack of 5 meatroot to the grumpy frog:

I think I have this one fixed for the next update. Did it happen as soon as you sold the item or when you closed the shop?

If I remember right, after I closed the shop.

Also, some non-crash glitches while I’m at it:
Opening the wardrobe defaults your body color to white
If you make a save before planting seeds, plant your seeds, then reload that save, your seeds will still be planted
The texture for the far north cliff gets messed up with a bunch of grassy rectangles on some arbitrary day
You don’t seem to get a popup for receiving more than one stack of any given item

Loving it so far, but have to ask how to harvest the gapples from the orchard in the fall? I got three but not exactly sure how

Oh my Gosh, now the only thing I need to wait for is cooking feature

oh my gosh, yes! I’m so happy you’ve gotten this out! I’ve got some bugs and stuff that I can list, but I adored farming game and im happy to see it coming back as this :3

again–really happy to see that this is being worked on though!
I’ve now learned to basically avoid any major issues or loss of progress by just saving every night before bed; mostly so that if I load in and frank and allison break a hole in the spacetime continuum I’ve already done everything I need to that day and can just sleep it off, as that seems to fix it
And to avoid the crop layering glitch I avoid switching between saves (I actually just save over all of them each time just in case)

Nice to see this game getting some love once again. I found a bug where Rotatoes sell for $0 at the Frog’s cafe and an exploit that allows you to “clone” items for infinite uses (with a drawback):

I’m not sure if this exploit works without the need to hold the items in your inventory, it might just work as long as you made a save before you used the items.

The aforementioned drawback to this is that it will cause lag in the overworld and really slow down your game (it will go into a “Not Responding” state while loading), I’m not sure what causes this as I did have a max weight character when the slow down happened but I don’t think it’s an intended effect of the character’s weight.

(Please Note: this exploit was discovered on version 0.2.1, and may not work in future versions)

Here’s a quick one: to harvest your crops you need to click on them, but interacting with basically everything else involves you pressing ‘E’. Why not both? In fact, I bet you could make every interaction in the game work with only the mouse if you had a mind to.

I wonder what I’m supposed to be doing with all of the fish I keep catching, nobody but me seems to want any of them. I would have assumed the baker would want the bread-herring at the very least.

Here’s another one, I can’t place the Slimabean here despite it fitting perfectly into the gap, what gives?

Edit: Oh wait, It’s because I ran out of energy. There ought to be something that pops up telling you how much energy doing that would have taken.

The fish, as far as I can tell, are there to give the PC a source of energy if they’re broke. Outside of the baked potato, all of the food is really, really expensive, so I found myself relying a lot on the fish early on to keep the calories going. 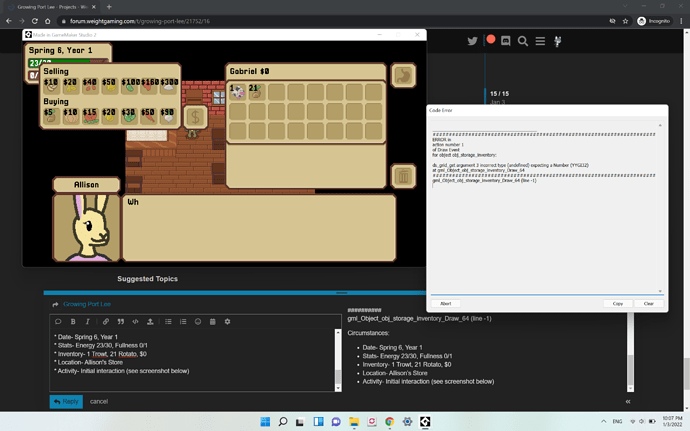 P.S. Love the fish puns. They sound so delicious!

nobody but me seems to want any of them.

That is what makes it so damn funny for me. I love their less-than-pleased reactions to your gifts. “Thanks, but why?” had me dying.

I had this exact same crash, but I accidentally cleared it instead of copying it so I couldn’t make a post about it. I think that we need to fix this, hopefully before the next version.

So if i plant a seed the game crashes