Hello, I have a game demo that I’m working on. It’s called Vial of Infinity and it uses some classic RPG mechanics. It’s furry themed, and contains mostly male and androgynous characters, but I am planning on maybe doing some female variations of certain characters, or adding fully female characters.

This is made in Game Maker Studio 2. Enjoy =) 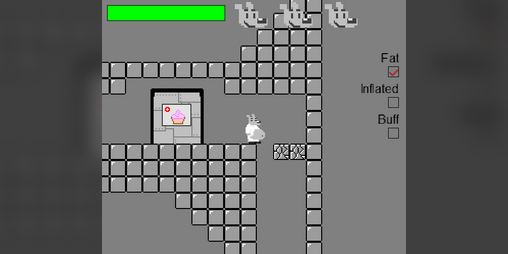 Installer version, or ZIP version within. 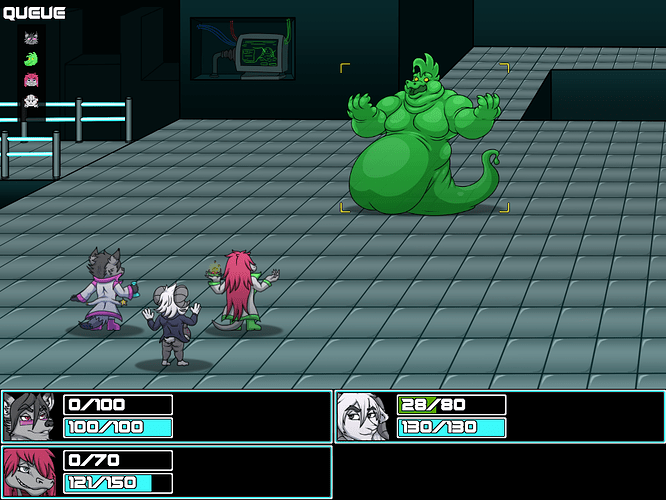 EXCUSE ME BUT I HAVE TO SAY THIS IS BEAUTIFUL

And I mean that literally; the art style is a solid A+! Pretty much everything is well drawn, but my favorite aspect is definitely the various expansion stages everyone has. You can even see the party’s roster get increasingly desperate despite looking at them from behind!

(Though the bio pics are much more sufficient if you knowadeyemean P:)

Gameplay so far is solid too! The way mana is handled is unique, and nothing is overly easy and/or broken. I WOULD have complained about the K-9 boss… up until I found that third character. Turns out a character who can transfer damage is kind of useful!

I haven’t made it much further than the teleporter puzzle, but what I’ve seen so far is mighty solid! I will say that I hope some female representation is added to our company of strangers, or at least to the enemy roster. Speaking for a friend.

thank you very much =) This is my first time doing real level design, so I’ll try to keep in mind to add more scripted events for when I want to influence the player to do things like get the third character.

Yeah, I dont draw females often, but If i have time i would like to do random male or female variations of things like my biped enemies.

This is extremely well done! There’s a lot of variety in the characters, enemies, and the effects of blowing them up, and it’s all drawn and sprited out very well! The regenerating energy and increasing capacity instead of decreasing health put a nice spin on standard RPG mechanics, and I like that. As the foundation for a full game, this feels pretty solid!

My one main criticism for it is that a lot of it feels kinda slow. I might speed up or shorten the attack and ability animations so combat can progress more quickly, and maybe speed up walk speed or shrink the level maps down a bit so it doesn’t take as long to get around.

Besides that, I might tweak adding new party members so they start at the same level as the people already in the party, or just a level or two below them. Cupric didn’t feel very useful by the time I found him. I’d also tweak the walkable areas on the maps, the catwalks over the green stuff were a little tricky to get onto because the parts I could walk on were narrow.

What a great demo! I loved it!

I noticed one thing:

I guess it’s not the intended way to do that? But it’s most certently the easiest way to win a fight over and over again.

considering most people here would rather female weight gain, it might be a good idea to add in female characters, especially since you are considering it

I think your saying that statement while in the early game.

I’d agree with this. Also you just want your game to appeal to the broadest base possible.

It was just a opinion

and yes I know the game is just a demo. It was just a thing to consider that this is the easiest route to win battles again and again right now (IMHO).

This game is super adorable! I would love to see it expanded upon. Although it can be a little slow at times.

As for the K-9 boss, he’s super easy if you know what to do.

Would be cool to see all weight gain, instead of belly expansion on the main characters too, if that was possible?

If you do add female characters it would be nice to let us choose between male/female/both. I know it’s extra work, but just something to think about in the long run. For a game like this people do have their preferences.

This game was a lot of fun. The inverse HP/damage kept confusing me at first but I think it was definitely the right choice. The type/weekness/strength mechanic was also great. The character/enemy visual “damage indication” was probably my favorite thing about the game and I can’t wait for more of it!

Some nitpicks with the demo though. The side characters, for me, came a little late and were under leveled. Some attack types were unclear (bubble is air or water inflation?). And some of the attack animations were a little slow. Those are all very minor things though, none of which significantly impacted my enjoyment.

A couple of additional features that might be nice (if they arnt too much of a hassle): the ability to have multiple saves, being able to re-map buttons, and since you mentioned it female allies/enemy variants would be nice(though I know that ones not an easy/quick addition).

Sorry for the long comment, I just had a lot of thoughts on this amazing game. And honestly I can’t wait to see more of it!

All this female talk actually makes me think you could just implement a skin-swap, not unlike Shovel Knight’s “body-swap” system, where you can change the sex of a character at any time you please. It would reduce the amount of character’s you’d need to make, and hopefully be simple-ish enough to implement.

An excellent little demo and i hope to see more of it in the future, if it’s possible. The art style, the visual details on the party and enemies, even the character interactions show great potential. Now, i’ll have to agree with the rest of the people here, a “run” button would be nice, also a way to re-map the controls and multiple save slots.

On the female characters/enemies debate i’ll have to agree as well, if it can reach a wider audience by appealing to them, then we all benefit.

I’ve seen your work before through Feed-a-Furry @eggo21 and i know you can deliver a fun game when you put your mind to it.

Are there going to be any additional characters?

nicely done just a small criticism. the teleporter maze was frustrating was there a hint i missed somewhere? and now for a few questions i noticed you had a poison type status ailment any plans to include others? also cubic given the text in game suggesting he didn’t recognize mike was he meant to be a boss or something later on after rembering or is mike not who he thinks he is?

This shows an immense amount of promise. Very few WG/inflation games have anything close to this level of polish, production values, or content. I’m very excited to see where this goes.

If I can bring up one minor criticism, it’s the process of adding party members. Whenever I play a party-based RPG, it’s something of a pet peeve of mine when one or more party members are at a lower level than the others. Even if their power is balanced to compensate, the thought that some party members are weaker than others bugs me.

Furthermore, in this demo, one of the party members is way too easy to miss. In order to add Centari to the party, the player needs to unlock his laboratory by hitting two switches well past where he is. Then, despite no indication that the door is unlocked, the player needs to backtrack through the room. When I first realized the situation, thanks to my aforementioned gripe with level disparity, I restarted the demo in order to flip the switches while beating as few enemies as possible. Then, after recruiting Centari, I painstakingly beat every enemy in the level in order to power him up. I almost did the same thing when Cupric joined the party.

One more thing. I agree with everyone asking to have female characters added to this game. That said, I imagine that there’s no easy way to do so when your game includes OCs that people have presumably commissioned you to include.

that’s my plan I think. at least for most humanoids like the guards and interns be able to have an identical 3-page battle sprite thats female instead, and you would be able to choose male female or both in the options menu.

I am planning on doing a lot of my own characters in the game, letting you customize your party (besides Mike)
So i will be sure to at least have 3 females for sure if ppl want a 3 female party.