Cheetahs Are Meant To be Fast (Khatoblepas and Urg's entry) 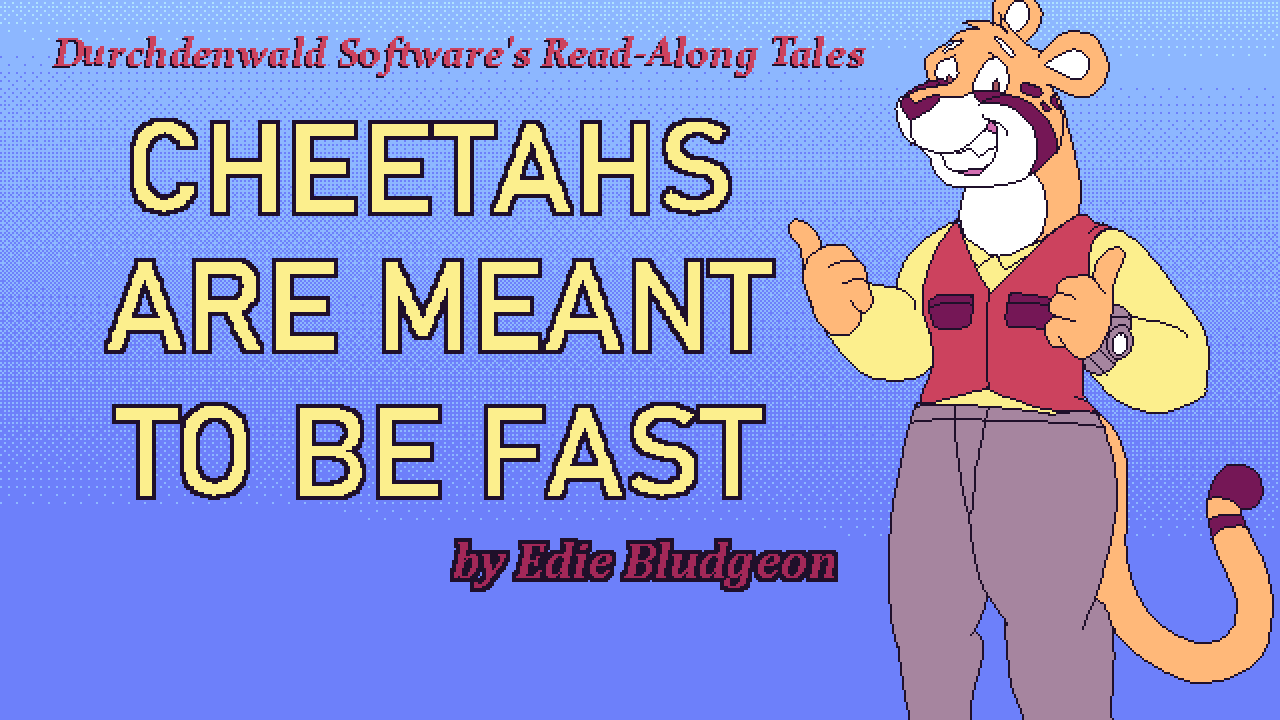 A game about a Cheetah named Chet who needs to lose weight. Can you help Chet the Cheetah lose weight??

NOTE: Avoid using the eraser tool on anything other than text, this can softlock the game (a fix for this willl be uploaded as soon as the judging ends). If this happens you can restart the game from the beginning by pressing F9.

NOTE: If you downloaded this game from Gamejolt (or the other two sources before 7:48AM GMT) then you got a version with a pretty bad bug Khato managed to fix juuuuuuust before the grace period. Sorry about that!

MIRRORS
My Gamejolt
Dropbox (but don’t overload it now, we use the poor person version)

UPDATED NOTE: To play this outside of Windows use the amazing ScummVM, they just added support for Adventure Game Studio files!

VOICES
Vmoartet as Chet the Cheetah (My very very good pal who did very very excellent)
Norman Rafferty as Ricky the Rhino (Yeah!! That Norman Rafferty! From furries!!)
Momochilla as Rachel the Rat (Who came in so last minute and nailed it so hard!)
HelluvaLoonatic as Pendleton the Penguin (Cool new friend and great actor, consider using them in your projects!)
Meg Molloy Tuten as The Narrator (listen to them play a peppy Flordian ghost on the podcast they co-write guys holy SHIT this was a get!)

PUZZLE SOLUTIONS
(because they might be really obtuse we don’t know, we had no time to test them on people)

Chet looked into the mirror
Thought “Oh my, this can last”
“I’ve got a big belly that wobbles like jelly
And cheetahs are meant to be FAT”

Now he’s filled out
His health, his business
For this marvelous, regret-free kitty

So remember dear
Take heed, you’re not getting younger
Don’t live with
hunger

It’s not what you’re meant to be

SHAMELESS PLUG
If you like this game you might like the last project me and Khato worked on together, Terror Of The Vampire! - a non-kink (but still Chubby Animal Boy-heavy) gothic horror-comedy!

I don’t know how you did it, but your game actually opened my CD drive during the weighting game bit. Props to you, holy shit! You nailed the aesthetics and took the theme in a very interesting way!

Though after snipping all of the broken text from the story, I don’t know what to do. Was that it? I’ll update if I can figure it out!

Tl;dr an insane amount of detail went into this, I’m blown away

Edit: Ahhh I see, I had to erase the red text.

NOTE: the game crashes if you try to use the catapult in what I assume is the ending!

This was a really impressive entry! The presentation, the graphics, and the inclusion of voiced lines are all fantastic, and of course, a good body-positive message is always nice. It was kind of frustrating to play at times, though. It’s easy to forget which pages scroll side to side so it took me a while to find all the words, and switching the different tools was kind of buggy. Also, this may just be for me, but having the game open up my CD tray really startled me and having it mess with my computer like that gave me a fair bit of anxiety and soured the mood.

I can’t seem to complete page 4

The word ‘long’ doesn’t appear to actually be a word you can cut out. :V

Edit: nvm figured it out lol

So some things I’ve noticed, and it just might be me

If you minimize it and bring it back up it literally cannot be closed and the window goes black, and I think it’s possible to break it by not doing things in the right order because she didn’t narrate the catapult scene change and nothing else would progress.

Other than that I think this is BRILLIANT, honestly I am astounded at how you captured the feel of old kids games from the 90’s it was almost terrifyingly nostalgic. Also when I looked down at my computer and saw my disc drive spat out the disk in it I got a good laugh out of that

I’m going to give it another try but holy hell this was amazing, would love to see more in the future.

EDIT: So it turns out the reason is it won’t let me erase one of the sentences completely from the Catapult scene, the one on the top, tried just about everything including playing it about five times to get it to work and doing things in different orders. Anyone else have this problem?

EDIT 2: Getting a bit frustrated now because I accidentally gotten the eraser taken away, and no way to get it back I started it up again after closing it, even tried fresh installing it, and it takes me back to the same place I was left.

Just finished this, and yeah, I’m blown away. Honestly I was half-expecting to see a new file on my desktop or something after finishing, lol! I’d love to know how you did this/what you made it in/what tools you used/etc if you ever get the chance to tell me! My discord is Hotwoodcoldwood#5644

Definitely. Never would’ve expected this type or quality of content from a fat fetish game made in two weeks ahahah!

You’re kidding…
Not only did you do the fake crash, window name changing, meta shit, DVD drive, etc–but you put the solution to the word puzzle on my fucking CTRL+V clipboard?!
This submission is insane.

Definitely nailed that meta vibe and the old edutainment style! Slight spooks for the season, actually good message in the end, and a cute cast of characters! Definitely would love to see more games in this meta sorta vein in the community.

I don’t understand, why I can’t erase any text? Can someone help please

Is there anything after the story gets completely hosed? I’m stuck on the final page of Chet in static land.
Edit: Nevermind I forgot to click around to other pages.

I’m stuck at the part where everything is just completely destroyed and she has Chet doing jumping jacks, not sure how to progress as she’s taken both my cut tool and eraser, and I’ve thrown everything but the kitchen sink everywhere with the stamp tool but nothings happening

I really enjoyed the game cuz its mechanic is pretty and art is great!

“That sounds a lot like Meg Tuten. There’s no way- I mean I know Urgurgurg is a fan of the podcast but there’s no way- OH GOD IT IS”

Hell of a get there indeed!

it’s pretty good it’s nice to see something quite special , and I like it very much

Hello, it tells me the archive is corrupted before downloading. Is it safe?

@Snugwow Hey! Sorry to hear about this. My brain was a few AGS versions back when I coded this thing - I forgot deleting save data wasn’t just a matter of deleting big obvious files in the game folder.

Go to your “C:\Users-YOUR WINDOWS USERNAME HERE–\Saved Games” folder and delete “Cheetahs Are Meant To Be Fast” and you’ll be able to start the game fresh. Sorry about that eraser glitch though, we’ll look into it!

@pauPRO Yes! Newer versions of Windows just has a ‘better safe than sorry’ approach when it comes to exes it can’t recognise. Aside from the CD Drive move that freaked out some people, our game doesn’t touch anything important.

@hotwoodcoldwood Khato assurews me Adventure Game Studio has no such feature so… Looks like we manifested our Narrator character into reality and she’s haunting your computer now. Soz about that!

@Mariofan Forgot to include the solution to this in my post! Updated now! 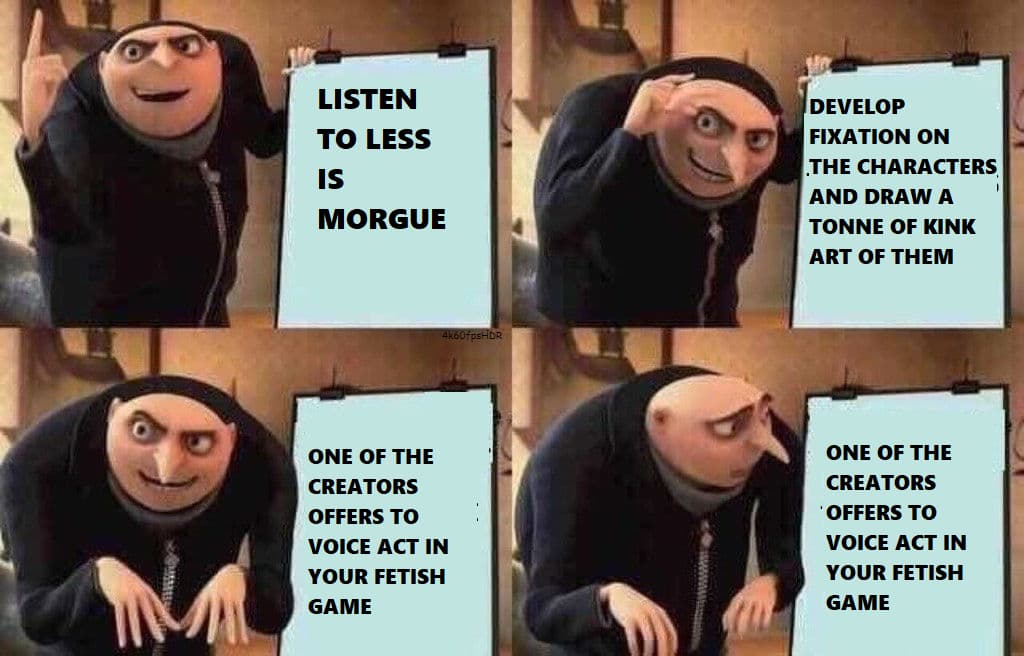