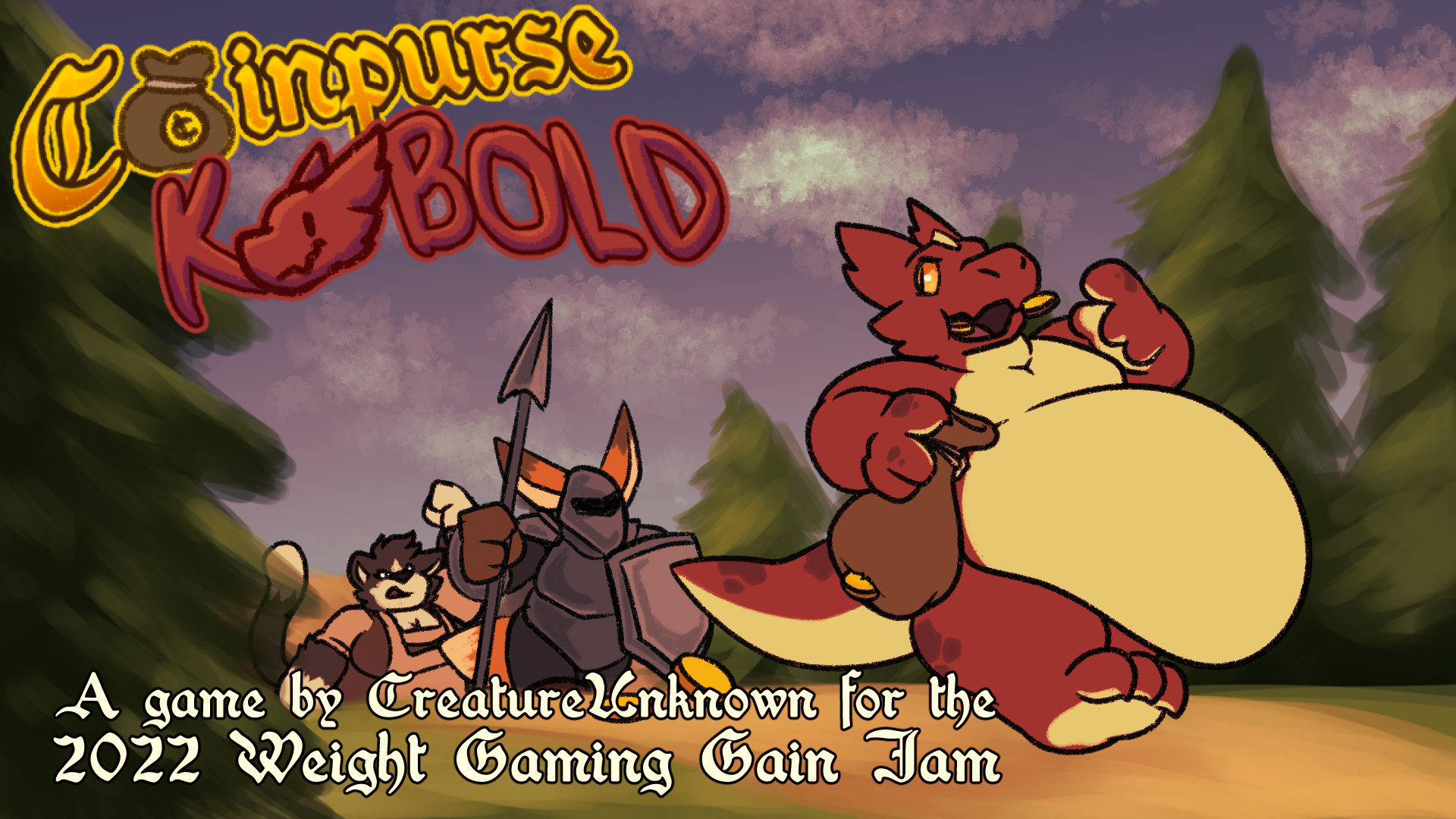 Help a sneaky kobold eat a bunch of gold to bring back for their dragon! 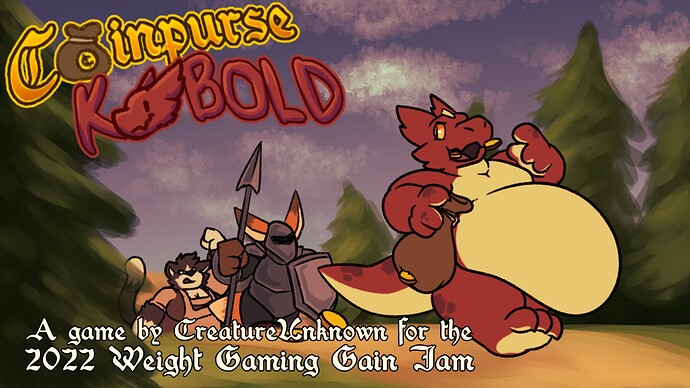 Sneak around the kingdom of Cupiditas as a kobold, gobbling up every shiny thing that comes to their vision. Be wary, as the more you eat, the bigger you get, the slower you are, and the more noisy your coin-filled gut will become! Don’t get too greedy and get caught, else you might be shaken for all you’re worth.

Features 4 kinds of up upgrades, 8 unlockable colorations, 3 unique areas with randomized loot and people, 4 cutscenes for getting a good score on the levels, and lots of wobbly bellies.

Also features New Game+ like mechanics, and progress through failure, to fulfill the wildcards.

Controls:
WASD or Arrow Keys to move
E to Interact
Shift or Right click to Sprint
Ctrl or Left click to Sneak
Scroll wheel to zoom
Space to Jump

Help a sneaky kobold eat a bunch of gold to bring back for their dragon!

This is a wonderful little romp i can’t recommend enough. it really does play into the greed theme, it has progress through failure used rather prominently cause if you get caught a lot you still eventually work up enough to get upgrades to make it easier.

the music is rather fitting. and playing as the lil minion kobold is pretty darn fun.

there’s a bit of weirdness at points. but it’s still a fun romp all the way through.

Belly growth being a bit… weird, aside, pretty good. My strat for good money is to go to the keep and blitz straight towards the throne room so I can get all the monerz while being careful not to overindulge and get the non-standard game over then blitz pass the throne room guards again and then escape the rest of the way carefully.

This is a great game! There’s a few bugs that can be frustrating, like the back door in the top house of the first area making your belly go crazy and then squeaking constantly the rest of the level, and the fox in the far left room of the castle ALWAYS chasing you if you go past him, but other than that, I really enjoyed it!

Six issues, other than that it’s great.

I love your games but stealth is my weakness and i was really bad at it. At best i got 2k coins, saw big dragon dad with jiggly belly and called it quits for now, is there a certain amount, is there a certain total amount or you need to buy all upgrades for more to happen? I might try again later but dont take this as a negative as its just a style that isnt to my liking.
Also, found a bug, at the castle, bottom right spiral staircase, i fell down from it and got stuck into a corner with boxes with no way out, had to restart.

Such an amazing game!

The game was a nice concept and could be rather fun and cute to do. My biggest problem with it though is the visuals, being super wonky and hard to really have fun in terms of kink. A good change would probably doing a tier growth system where your icon changes depending on how much gold you have, rather than one circle on your stomach growing bigger. More sneaking mechanics would be great and more flesh out levels would be awesome. Overall a great game that was cobbled together but it certainly feels like it. If it wins I would love more fleshed out stuff from it.

really having lots of fun with this! Ate my way up to 5000 coins in the pit, and I have all the upgrades and colors, so I think I’ll call it done there.

I, like most of us have a few criticisms.

1: The stealth is wonky in places. Sometimes guards will just start walking toward you, completely leaving their patrol path with 0 indication that they’ve spotted you. It happened to me constantly until I learned to just never fully trust the stealth meter.

2: The movement is very slidey and that got me caught a few times.

3: (this is arguably a small one) Being able to change the gender of the big dragon and the player kobold would be nice. The complete lack of girls makes my gay lil heart sad

But seriously you have a really solid concept for a game here, and pretty good execution for something made so quickly. You totally could put another month or two (at a less breakneck pace) of work into this and sell it for a few dollars. I’d buy it!

Edit:
Here’s a screenshot of my final gold count: (HELLA spoilers for the big dragon. Don’t look if you haven’t played!)

overall been enjoying the concept of this game a lot! my only question is if that little new game + admin card in the upgrades screen does anything

This is a really cute little game, if a little jank in places. One notable issue is that it’s hard to get gold from right under people’s noses, and I occasionally got caught by guards despite being outside of their vision cones. In general I would like more ways to lure guards and other npcs away from certain places. Also had a issue or two with collision and level geometry, but a lot of that has to do with the use of pre made assets and and the workload if one added level assets made for the game would be a bit too much for the short window You had. Certainly something to look into if You end up expanding upon this, which it has a lot of potential~

Stylistically, this is wonderful! Extremely cute in both cutscenes and gameplay. I’ll echo what some others have said about the belly physics being a bit janky, but besides that I love this. Little details like getting stuck in doors and the dragon promising to ‘reward’ you by eating you along with the treasure you bring them really help to sell it.

Lovely game! I do hope it follows the development of Smasher, I’d love to see more updates to this and more polish and whatever else you guys might be planning adding! (Hopefully a blueberry mode like in Smasher.)

I’d love to see this on steam like Smasher too, keep it up

-it looks amazing and the mixture of 3d and 2d wasn’t distracting or in the way
-I picked up the mechanics quickly and didn’t feel like I was fighting with the controls
-the WobblePhysics™ has a tendency to lag behind characters and once filled my whole screen for a few seconds
-occasionally guards would just start chasing me even though their question mark indicator never appeared
-there are some locations within levels that are too difficult to sneak around that I just never bothered (the upper floor of the tavern and that house at the top of the farm)
-progression is very slow at the beginning and even after I got most of the upgrades I didn’t get the feeling that anything changed
-I didn’t really get the new game+, idk if I just missed something or if it hasn’t been implemented
-I wish there was more variety of loot, after reading the upgrades I thought that you could actually steal food but as far as I can tell it’s just gold

I really love this game and hope it continues development after the gain jam.

The tavern has an upper floor?

One other thing that bugged me was that the ‘make the villagers fatter and lazier’ upgrade didn’t actually seem to do anything to them in terms of how fast they were or how easily they spotted you. If it does do anything, it’s pretty much insignificant. I might make that a bit more worth spending money on.

i really like the gameplay and theming of this game; the multiple, 3D maps were quite ambitious for 2 weeks and the high alert system is pretty clever
my only critique would be the map design itself, the second map in particular has a pretty nasty chokepoint and the guard by the door will often get stuck in the door, in a non-kinky way, preventing you from leaving the level with your spoils