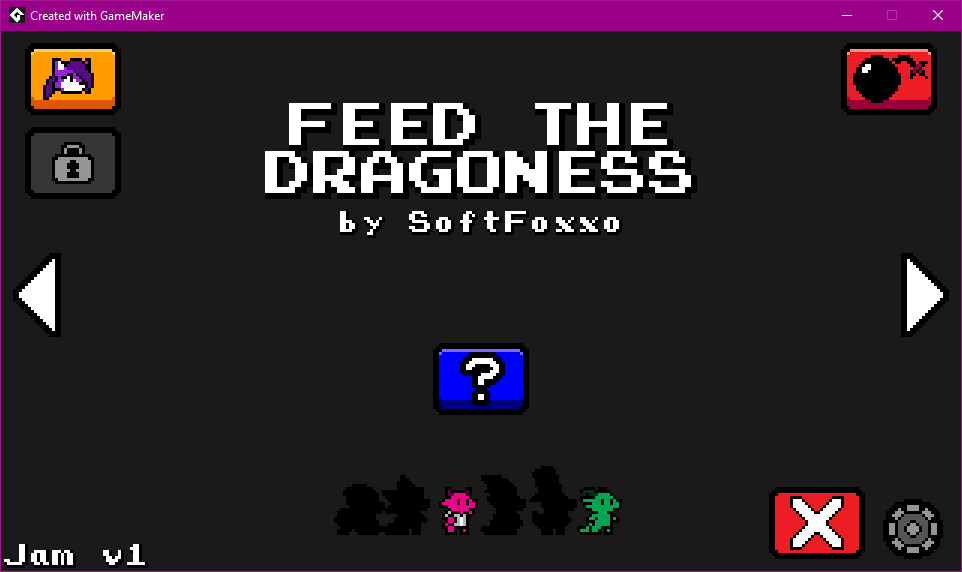 Try to feed Azalea well enough to meet her calorie quota - just make sure that she doesn’t eat too many slimes!
Feel free to post your best calorie counts with each level!

I’m throwing this onto itch to avoid any issues with downloading.
You can find the link here: Feed The Dragoness (18+) by SoftFoxxo

Feel free to let me know what y’all think! I slapped this together really quickly since I’ll be busy this weekend, but I should be able to get some bugfixes in before the end of the Jam if there’s anything I missed.

Also, unlike every other game I’ve made on here, this game exclusively uses only the mouse. There’s only 3 levels, but I may be able to add some more (or add more pre-set rounds to the levels already there).

Wild Cards used can be found in the instructions - the blue button with a question mark!

Is it meant to be that snowbolts are destroying not full plates?
I can’t complete the second map because of it.

Yes - you might need to place more green kobolds earlier on so the plates will be full (and invincible).

i feel like a “round preview” of sorts would be a welcome change, had to restart a few times because i didnt have enough kobolds of a specific type to deal with something.

A delightful first entry for the jam!

I kicked Endless Mode’s butt for the first level and I couldn’t actually stop! It could use a manual “stop the run” button as the only way I could bank my progress was to effectively sell all my sword kobolds haha.

One bug is that I can’t seem to buy any upgrades? Clicking either of the top two buttons doesn’t seem to work, alas. 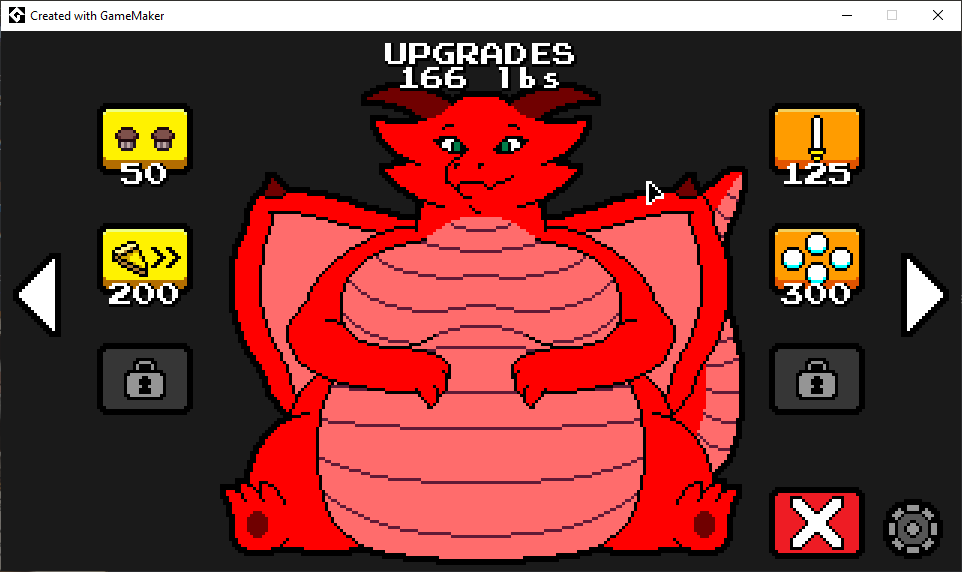 Definitely could use an upgrade for the second level as I’m struggling otherwise!

Upgrade bug aside, on the whole a lovely entry thus far and I’m excited to see what extra content awaits!

Also, a PSA: click the bomb icon at your risk - there is no confirmation window so you can wipe your progress a little too easily!

Does New Game+ currently do anything? Because I don’t notice any difference.

A lovely game! For how short it was, I sunk in a surprising amount of time. And the kobolds are just adorable. All in all a well-rounded package. There are a few issues here and there, but thankfully they don’t make the game unplayable.

(Edit: fixed) As Alex mentioned above already, there seems no way to purchase the upgrades, which may make the later stages harder than intended. I for my part barely scraped by in level 2, both in normal game and in NG+.

Red feeder kobolds seem useless to me. Compared to the green ones, they are more expensive, slower, their food takes up more space on the dishes (apparently 3x), and it doesn’t provide as many calories. I’d be intrigued if there was a strategy around pointedly overfilling a plate (e.g. hitting a medium plate with two muffins and then a pizza slice), but even per piece the pizza is worse than a muffin.

And to add my two cents about endless mode: As soon as the snowball is rolling, there is nothing stopping it. I stopped placing kobolds when I saw that they don’t even have anything to do anymore.

Really cool little tower defense game! I dont have a ton of time to play it atm but I look forward to getting to mess with it when I can!

The only thing I wanted to point out quick is please remember to state what wild cards you used within the game itself as specified in our rules. You can either use the assets we provided or just list the wild cards you used somewhere in one of the menus or on the main menu. If you have any questions feel free to reach out to me!

Pretty fun baseline here. Decided to see how high I could push the score of stage 1 (not NG+)… 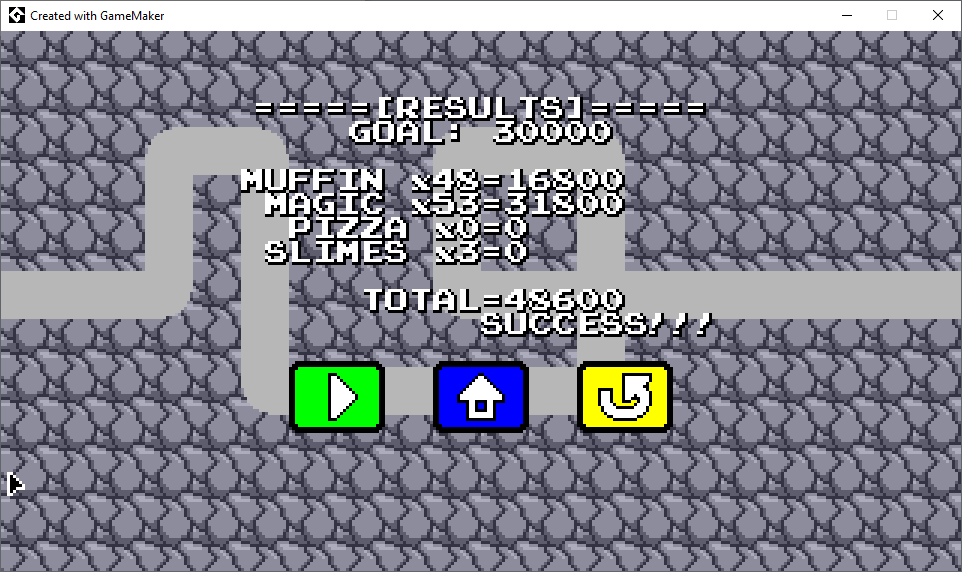 I think I must be missing something here, because I can’t beat the first level. I only have the basic muffin-dispenser, and even with filling every plate it doesn’t meet the 30k quota.

Edit: Never mind, was just running out of HP and not realizing I did so.

I stated the wild card info in the game’s instructions, accessible by the title screen - if the wording in there needs to be adjusted, I totally can do that in an update!

At the moment, it just makes getting money between rounds slightly harder.

Alright, I just uploaded a quick update since I got some time. The itch page has the changelog as well as the new 1.1 version. It adds a few more changes for New Game Plus, fixes a typo, and makes the upgrade menu work. To use your old save data, just load the new version like normal - it shouldn’t be incompatible in any way.

I wonder if anyone’ll notice the little “attention to detail” bit I added to the upgrade screen… If you’re curious, try clickin’ around with the “voice” audio on!

Haven’t upgraded to 1.1 yet, but I’ve got a suggestion: the game really needs a “this is what’s in the next wave” thing, since it’s a pain in the patootie to make food kobolds only to find that there’s no actual plates in the next round, or make attacker kobolds and have no slimes appear.
Also I’m like 70% sure that the sword kobolds have a bit more range than their little circle shows.

The blue range is just their targeting range - it’s how it works in other games like Bloons as well. Otherwise, the Lipomancer would basically have the whole screen filled because of the magic muffin’s homing properties, lol.

I’ll consider working on a “warning” system for upcoming waves on a later update before the Jam’s over - I think showing everything all at once might be overkill, but at least saying “in this round there will be x Red Slime(s)” before hitting Play would be useful.

Got ya, I just wanted to double check as I only saw New Game Plus there but none of the other cards, but your post claimed using all 3 so just wanted to make sure you had all of them in there.

I’ll make the phrasing more clear in the next update, and add in the wild card graphics. I’m certain I described the kobolds as MINIONS in all caps in the instructions, and I definitely described the pounds system similarly to “even if you lose” aka “Progress through Death”.

I can’t figure out a working strat for level two cause of that darn red slime, even with the upgrade for the pink kobolds. Also, is it only me or does it feel like the pizza is less calories than the muffins? My only other complaint is farming for the pounds to upgrade feels like a drag, only being able to gain 11 (or 12 sometimes) pounds from level one.

The pizza takes up more space on the plates, so if you can get them on the single plates you’ll get more calories - otherwise they’re good for filling up the bigger plates/trays to speed them along.

Updated the game to version 1.2!

This updates the instructions to include the wild cards, and adds a warning to let you know if there are any slimes in the next round, and what the strongest one is. It does not work in endless mode at the moment, nor on the first round.