Since there seems to be a lot of confusion getting body morphs installed and working in Skyrim, I thought it would be good to make a general guide for you lot.

First, I’m assuming whoever is reading this already knows the basics of installing mods, has their preferred mod manager installed and setup, and has the Skyrim Script Extender, or SKSE installed. If you don’t know how to do any of that, look up some beginner modding guides.

Starting off, you will need to download the following mods:

Optional Mods to Use Morphs In-Game:

I also have made several mods that have weight gain or expansion elements in them. You can find them all here.

Once you have installed the above mods, you should have a lot of files in the Data/CalienteTools/Bodyslide folder. In there you will have the BodySlide.exe and BodySlide x64.exe, as well as the SliderSets and ShapeData folders, among some other stuff.

You will need to run one of the two BodySlide tools (either, depending on your Operating System) to build the outfits meshes so they can have morphs enabled. Depending on your mod organizer, you may need to run BodySlide through it for it to properly run. Just look up “Setting Up Bodyslide in [Your Mod Manager]”.

Once you have it set up, you will need to open it, select the outfits you want to build in the Outfit/Body drop down, select a preset in Presets drop down, and check the Build Morphs box in the bottom left, then select Build in the bottom center. IF YOU DON’T SELECT THAT CHECKBOX, MORPHS WON’T WORK. You will need to do this for every outfit you intend to use in game. If any of this is unclear, you should be able to find some video tutorials on how to use BodySlide out there. 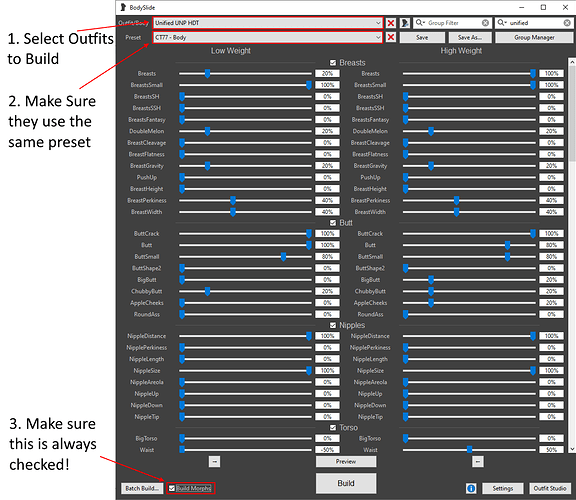 Once you’ve built all the meshes, they will either be in the Data/Meshes folder of your Skyrim Directory, or they will be in an output section of your mod manager. You will want to move these meshes to their own mod in your mod organizer, and ensure they overwrite all conflicting meshes. This process is slightly different for each mod manager, so you should look up “Adding a mod manually for [Your Mod Manager]” if you are unsure how to do this.

If you managed to install all of this correctly you will be able to change your character’s body shape, and cause them to gain weight using the optional mods listed above.

A good way to test if morphs are working is to use the RaceMenu CBBE Morphs mod, and open the character creation menu using the game console (press the tilde (~) key, then type “showracemenu” into the console), then move to the CBBE tab and try messing around with the sliders.

Here I go reinstalling skyrim for the 3rd time

If you go too large you might need to use Outfit Studio in Body Slide to fix clipping issues, which is fairly complicated. That by itself requires a big tutorial.

I finally just started poking around with Skyrim SE again over the weekend. Unfortunately I’m currently stuck on an unrelated issue (Immersive First Person View isn’t working like it used to).

As far as your other mods, I think I’ve seen your BodyBuilders mod, but the other two are completely new to me and look interesting, especially Morphology. The question will be how it interacts with some of the other gameplay mods I was planning on reinstalling, like CACO (Complete Alchemy and Cooking Overhaul).

I’ll let you know how it turns out if/when I get that far (the last time I played Syrim, I spent about a month tinkering with mods before I was happy enough to start playing

If it all works out it would be helpful if you listed your mods out and let us know how they worked out.

I had some time earlier today to experiment with Morphology, and I’m afraid it’s a no-go for SkyrimSE. It’s not designed with Skyrim SE in mind, and while it loads without error, it doesn’t seem to work right. For starters, every time you try to harvest the “experimental” ingredients, the screen blacks out for several seconds (as if you’re resting) before you can act again.

Second, i spawned some of the new ingredients specifically for some potion brewing (Imperial Bile and Dunmer Bone Meal) to make a potion of Breast Augmentation, and it was not affecting my character’s physique at all. This is not my first time using CBBE & Bodyslide, I have morphs functional via another mod for testing, and I’ve doublechecked all of my body CBBE sliders via Racemenu, and none of the values appear to be changing.

I’ll be going over things in my install tomorrow when I get the time to make sure I didn’t miss anything, and update here if I figure something else out.

The fade to black during harvesting is intentional.

Is there a way to add these mods to the console releases?

Nearly all of the mods require the script extender, which can’t be added consoles. So, no.