Olive And The Ruby Bra

So to cut a long story short, I’ve finally given up my humanity to make an account here and post an RPG maker project I’ve been making. I’m not too well-versed with the topic, but what I learn will (probably) help me in future endeavors.

For a wee bit of background info, Olive Lowry is an archaeologist. But she prefers the title ‘Tomb Thief’. Her common heists can be summed up as ‘Here’s a ruin filled with some dead guys, I’ll bring a 10ft pole, and I’ll loot whatever I can carry because I can’, but this time’s different. Her intel finds her a tomb of a dead god, (probably) filled with riches ripe for the picking! But of course, with great riches, comes great things trying to curse, kill or misguide her. Currently, Olive’s resting in her tent before the big day, but I imagine she’d be up and ready to go when you get there.

Things that won’t be in:

Here’s a link to the discord server! It’s mostly for just chilling with the community, but there are some game related stuff there too lol.

Here’s a link to my Ko-fi, so y’all can support me if you like. (It’s mostly just gonna be a tip jar, sso I don’t have to worry about updating two things, hehe)

Thing to note: If using past version saves (eg. using a 0.5 save on version 0.6), don’t. It can cause a lot of bugs, like turning Olive into a very tiny boat, removing the quest journal from existence, and just a whole buncha stuff. I’ll figure out a way to skip time so it’s easier to get to a point where you last were at, but for now it’s safe just to make a new save. (Minor updates may be safe, but ill always warn if it isnt!) 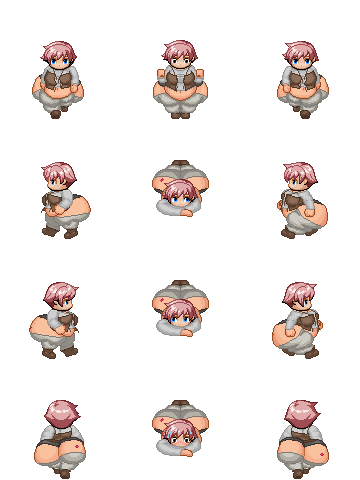 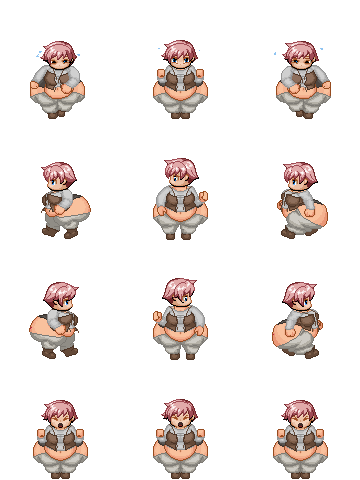 So here’s some poses I worked on (based off of sprites I found in the files of ‘currently unnamed’, big thank you to that team of hard workers, I hope I don’t make any of you mad. It’s totally okay and justified but still I’d like to think I’m not entirely in the bad, but you never know how people react when they figured out you took something of theirs, made minor revisions and then post it on their own thread.)

Ooooooh you’re doing sprite sheet specifically for emoting? I’ve been wanting to try that as well, but have just settled for making new balloon emotes at the moment.

I couldn’t handle my characters visibly just standing there whenever they were reacting to something, so I had to do something about it. also im flattered you came to visit thankyou somuch

I’m looking forward to trying it out! It sounds like a lot of fun.

sorry about this but i gotta link this track from ms splosian man Ms. 'Splosion Man - Badonkadonk - YouTube

very fitting and i appreciate the reference very much.

Actually, i just thought of something. Maybe i can just put a link to what ive got so far and then use that as a beta testin sorta portion before gettin a demo out… If i can figure out how to. publish one of these things. ive never gotten that far before…
fuck it thats what im doin, to hell with just sayin that i actually did shit, im gonna show it.

Links up! Tell me what yall think of it so far, maybe some ways I can improve somethin, yknow the gyst prolly. It’s fair to be blunt!

Quick glitch report, after you get defeated by the iron guy in the basement and it fades to white the game locks up and says it cant load olive_immobile so I assume its a problem with loading a sprite

Huh, missing assets? Nothing a quick fix can’t. fix.
I did click a setting that said ‘dont use unused assets’ while putting it into a game format so maybe it’s got something to do with that. In any case, tomorrow I’ll for sure upload a new version of the game!

Yep, easy fix. It wasnt the sprite itself, but rather a custom script to preload an image that I spelt wrong because im a twitchy ween. as I said, I’ll have an updated version out tomorrow!

Also, for anyone playing it, I should give a few rules of thumb. Since I have no clue how to ‘despoilerize’ text, I’ll have to keep em as vague as possible.

Maybe I missed something, but I have no idea where to go after activating the first switch in the dungeon. Everything else is closed off.

I figured out spoilerizing hints so lemme help ya out

I don’t exactly know where you are but I have a feeling like it’s the part where you go through the not incredibly noticable crack on the other side of a wall, after the ‘mimic invisible maze’. Then there’s a relatively easy sliding ice puzzle that gets you a switch. The West wing, you have to fight a space whale after going through pyrite.

So, a few things about this game:

The encounters should be made slightly easier both in the beginning and in the ruins. If you happen to encounter 3+ enemies at any point, you’re pretty much kaput. Unless you got better gear, but you wouldn’t know where to look for it unless you actually reached some of the chests that have it. The skills also help, but again, if you happen to get into a fight with a big group while grinding and your escape just isn’t working…

Also, there’s a faulty tile that transitions you to the area east from the starting point. The one that’s initially blocked by the barricades. Here it is. 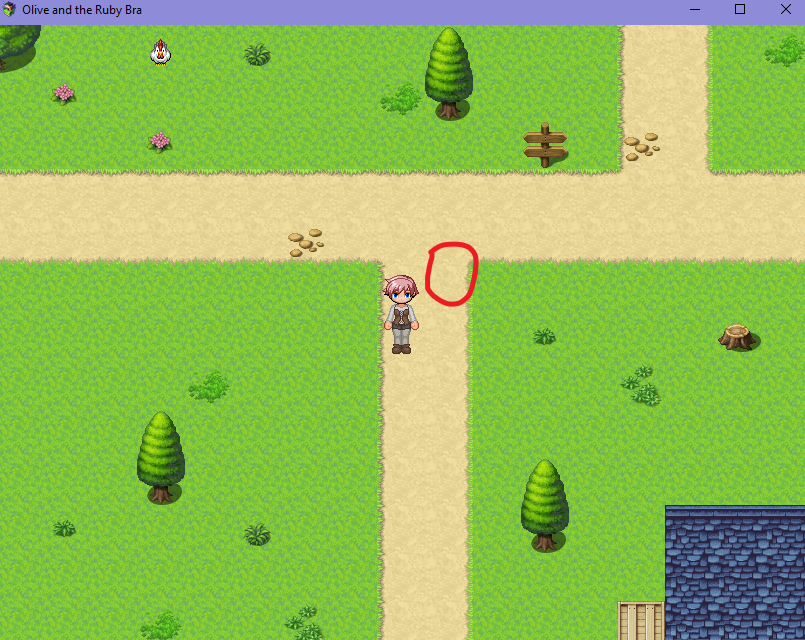 As was said above, there is a slight error when losing to the ruins boss. It was an easy fix by renaming the files that were needed, but one thing to note is that the scene also required the images that I just renamed. So there had to be both $OliveImmobile and $OliveImmobile1. Same for the Nude. Also easily fixed it with a copypasta.

Furthermore, is the game just supposed to end after the guy helps you get unstuck from the trees? Because it’s not letting me go any further and there are no messages saying anything like, “Hey, this is the end for now! More coming soon!”. It would just be handy to have something like that, since I’m not sure if there’s an error or if it’s the end of the demo.

In any case, looking past these minor gripes, I love what I’m seeing so far. The humor got plenty of chuckles out of me, and Olive’s smug expression just gives me life. I hope she gets a lot bigger on her journey! Maybe to the point where she can weaponize her fluffiness against enemies.

Keep up the good work!

oh my god bless your soul for this extensive feedback, I will do all I can to figure out what the fuck that tile is, maybe starting you off with a few options and generally reducing the amount of enemies you go against. , and I’ll see if there is a problem after the stranger gets you unstuck… As far as I know, you proceed right into town, but if I forgot the bloody transitions between the road and town then I’m not so brain.

Again, thank you so much for this feedback, and a smug olive is a good olive.

I had the same problem with the tile transition. It looks like it’s both the tile Crome highlighted and the one below it

Okay wow so there was just this random transitioning tile in the middle of the road. There seems only to be one, but I’ll double check to see if there might be any the other way around. Thank you both for this heads up!

edit: holy shit I did completely forget the transitions to town. big mistake on my part, holy hell, that’s where half the beta is

New version’s up! This time I made it so that you can actually go to town and play the game.
Oh yeah also it might take a little longer to download since this time I toyed with just having it pack all the assets within the files, and now I have learned for next time never to do that ever again.

also i will say, theres a part that most definitely has a chance of breaking (spoiler), going in and out of nude beach. I tried to set it up so that you walk on separate tiles and you just ‘fwip fwip’ between the two but my lazy ass didnt test it beforehand so I can only pray it works. Theoretically it should, but who knows.

Oh also i made the beginning a little more forgiving. (spoilers again) except for the boss part, you still probably should be level 4 for that. I also made it so that adrenaline is unlocked at level 3, as a little ‘nudge nudge’ from the game saying ‘youre ready’.

what the fuck color are goblin nipples???

edit: and i immediately regretted it