From Princess Goblin Story - A derpy little goblin-living sim , the game about a small goblin getting fat, or fumbling trying! 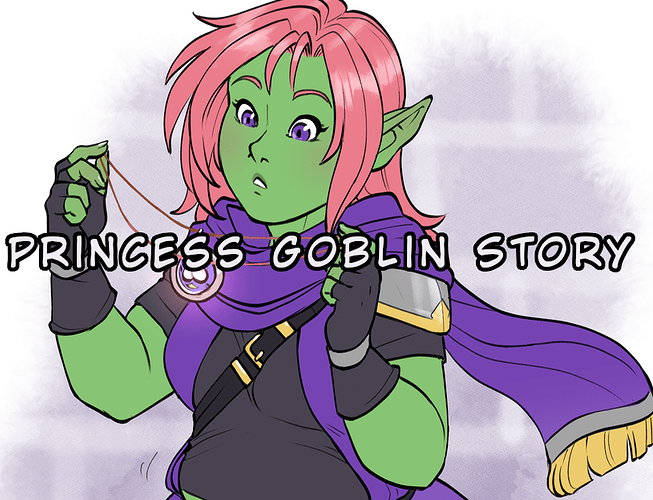 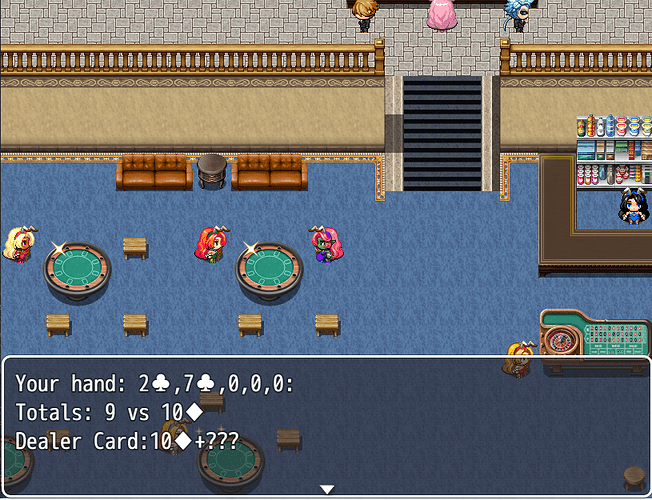 And technically I got this out before the game jam started!

Brace for bugs and otherwise, this is still probably buggy.

played through twice already and now with a new update, ill play it again. excited to see the new stuff!

There’s not a whole lot new here, I would suggest just taking your www folder’s save folder and throwing it into this one. It might break your stat display in menu but you can try out the few new things (Outfits/Weight size for 100 lbs or more) without having to start from scratch.

Can’t wait to see how far you’ll go with this one.

I really like the idea behind this game and it’s nice change to not have an RPG maker game that doesn’t revolve around combat, but i do suck at this game and have no clue how to progress well enough at the moment to get a good ending

I might’ve missed where/how to get the invite for the ball, heh.

Just out eat people, it’ll fall into your sizable lap.

I did want to have a few hints or otherwise scattered in dates or other dialogue but there was no time in the jam version. The library has a few hints, but to be more explicit:

You can obtain a dress by Lilium at her Port Way shop(2500 gold or 5 rubberstrand silk, you’ll have to buy one or two for 600 but there should be enough scattered through the town beyond that) or by making one yourself using a Tailoring Kit and high enough skill.

You can get an invitation by Beating Elanil AKA the 5th eating contest challenger, or going on a successful dinner date with Lilium, you’ll need to be chubby minimally for her to accept. She’s into slobby girls, indulge them and you’ll be rewarded kindly. If you have an invitation already she instead gives you $ if you haven’t gotten a dress yet.

And the minimum weight you need to hit is 75 lbs, or +45 lbs from the starting 30. There’s several ways to get this weight, Eating Contest and Lilium Date are the two easiest to do this… This amount is actually a slight bug, it’ll be fixed to 55 lbs (+25 from starting) in a future version.

Also, as for the ending: You need to attract the prince’s attention by high ettiquite/fitness/skill/intellect/weight.

Expect a lot of these values to change or be tweaked in future versions for the record.

Finished playing a run of it and i have to say i enjoyed it but i never was a fan of games with a time limit if their was just a mode where i could decide when the ball happens that would be fun so i could see all the content.

When I have more in, that’s indeed a thought/plan I had in mind. It shouldn’t take too long to replay it but an endless mode was something I’ve already kinda wanted. I’ll worry on that later though.

I really like the concept and what you’ve got so far, looking forward to future updates. A few notes:

You don’t need food in order to keep your fullness, just keep doing the eating contests.

Cooking for the most part still isn’t honestly, it’s one of the few stats you can train that actually can’t be used for winning the end of game, so it’s that useless right now. Best to train another skill honestly.
Using up the cloth isn’t intentional, that’ll be another fix I guess next ver.
Contest 1/2/4 have various AI gimicks, 3’s though is a pretty straight forward fight. You stand basically no chance beating those past them though if you can’t beat 3, they’re more or less a fullness check.
It only is tight if you’re indeed feeding yourself so often. There’s usually far better uses for your fullness than actually just eating your own food for now. Balance-wise I’m considering changing the rate fullness goes away though, as well as other jobs/time spenders that won’t take fullness into consideration as well.

With the cooking, honestly you should put in something like recipe x5 or x10, to make it worth it.

If my math is right, the best profit is Bread, with a 5:1 coin-gain ratio, or a .2 multiplier. coming close second is pizza, with a 35:6 ratio, or a .171 multiplier. Getting free meat may make a pizza profitable, assuming you go for cooking, but the long term determines a net loss in both coin and gain. The worst ratio is the giant egg, which is ironically the most expensive item. The rate is 20:1, or a .05 multiplier. This alone makes me ever so curious on how this is going to be balanced in the long run. Granted, having certain jobs give special item can change things marginally, the overall coinage given by aforementioned occupations is what will really decide how this is going to be balanced. Quite the puzzle you’ve made for yourself, don’t you think? I’m just going to LOVE metagaming the heck out of this when it’s finished, and see just how you balance everything. What a game this is!

To be painfully honest: None of the balance currently in the game reflects how this game will probably be, stat gain/gold rates/food amounts are all over the place, and I’ve not even bothered to really apply math yet. I’ll probably go back and go over all the event/job gains to even them out at least somewhat, but for now there will be clear winners for certain things.

Such as Lilium dinner dates giving obscenely high weight gain if you don’t mind losing etiquette, or how you can use the 4th Eating Contest fight for 75g to get up to 7.6 lbs per go, or the home bookshelf giving rather high stat gain at only a relatively small upfront cost.

In games I tend to horribly min-max and make efficient several things, and I’d rather not make the game based on a few not so obvious or math-reliant puzzle solving sort of dilemmas, so before I can even say this will properly be a 1.0 version I’ll want to at least fix up the jobs, let alone everything else to be fair and balanced enough.

For now though, this is a buggy, early beta build that is still little more than glorified demo.

Happy to see this get its own thread! I’ll probably wait to play again until things are a little further along, but I’m definitely keeping my eye on it. OwO

Downloaded the latest version, and encountered one small bug. I was taking the performing job at the Ferret Inn, and it had me waiting on tables, not playing the piano.