Hey there, Hoodah here. This is collaborative project between myself and Dom Foxley submitted for the 2019 Fat Fornite Game Jam, which got 4th place! Thanks to everyone for all the enthusiasm and support!

This topic will host future updates and patch notes as development continues. We’ll try to aim for updates every Wednesday, whether it be new art, assets, or concepts to share.

IF YOU HAVE ISSUES WITH ANTIVIRUS, try the first MIRROR version. Modern AV detects the custom icon replacing the exe as malicious, when it is not.

Extract the .rar and run the .exe to play.
Arrow Keys - Movement
Spacebar/Enter - Action (Eat food, use Hiding Spot. Must be facing UP to interact with Food or Hideyholes)
Esc - Open Menu/Quit to Title

UPDATE: 9/11 Hey there, sorry for the abscence of information lately but we have been working behind the scenes for a “full” demo to be released in the future. This update will explain what our main goals are for this demo, and what may or may not be included if time and resources permit.

These are the minimum features we plan to include for our next release of this project:

With new maps, of course, means…

We have a bucket list of features we would like to include, but may or may not due to time constraints.

I think that about covers it. I’m going to try to have something new to share every week, on Wednesday, whether it be new map tiles, concept art, or whatever else is ready to show off to the public. Thanks again for all the support, even after our limeight in the game jam has ended!

This is amazing! It was challenging but also fun as well. Loved how this feline went from a pole to a massively huge fat ass. Thank you for a wonderful job. 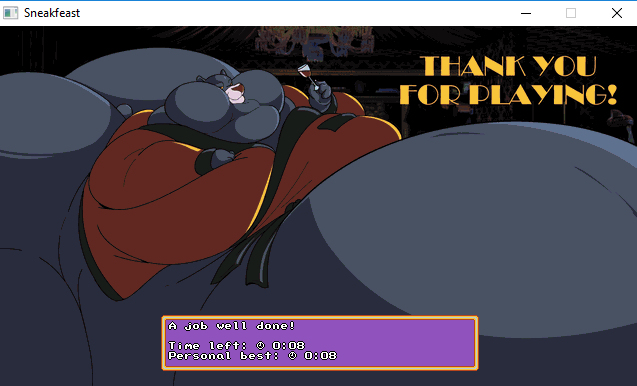 First person who manages to finish time attack with 20 seconds left will get a free 3-frame animated character sprite drawn by yours truly!
(note: Hoodah drew the in-game sprites, so quality and style will differ)

Post a screenshot if you manage to get it!

Hello hello! I want to say that this project looks quite solid, nice job on the whole team!

So far, I’ve managed to finish the time attack with 17 second left in the timer! I’m getting close!

However, I managed to reach it with the “food count as double” bug, which allow me to get a better run, perhaps? I still need to try a bit more and see what I can do! 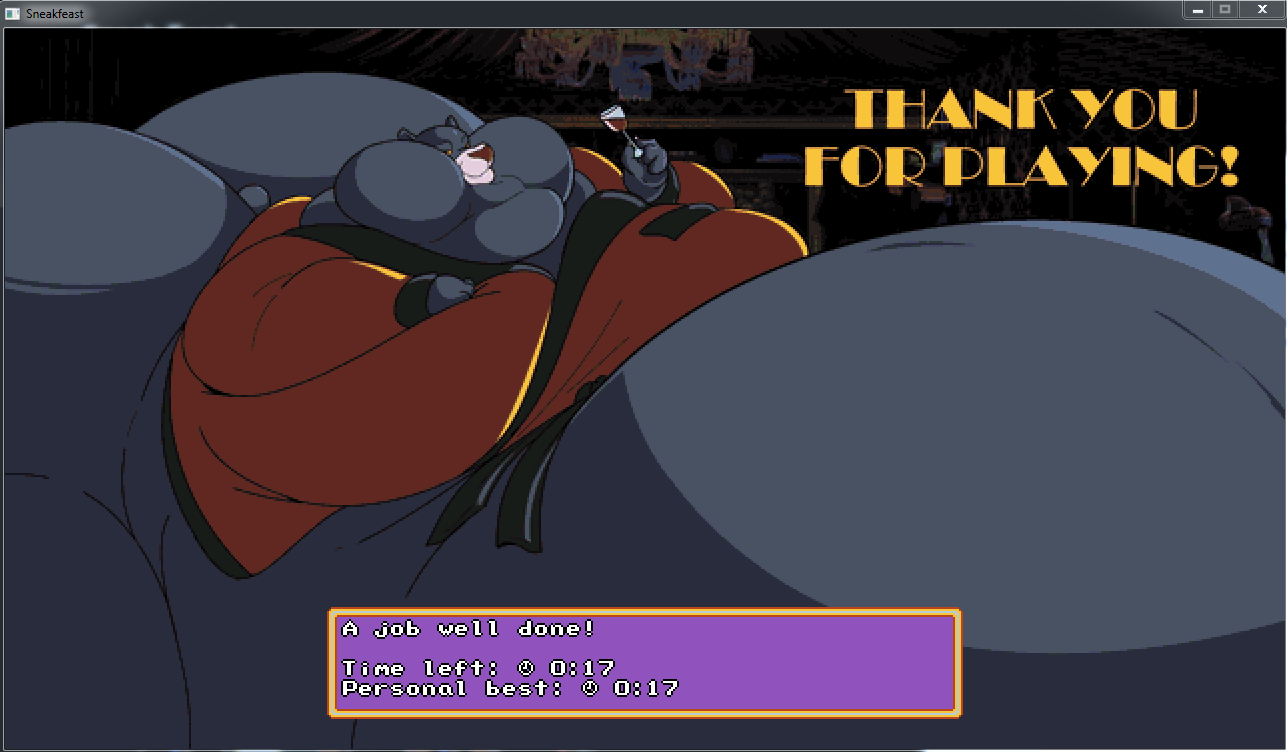 here’s the proof of my current time! I’ll keep you all in touch with what I can do!

Hello again! Sorry for updating so fast, but I have managed to not only beat the 20 second goal challenge by foxley, but I also got a extra second with it! 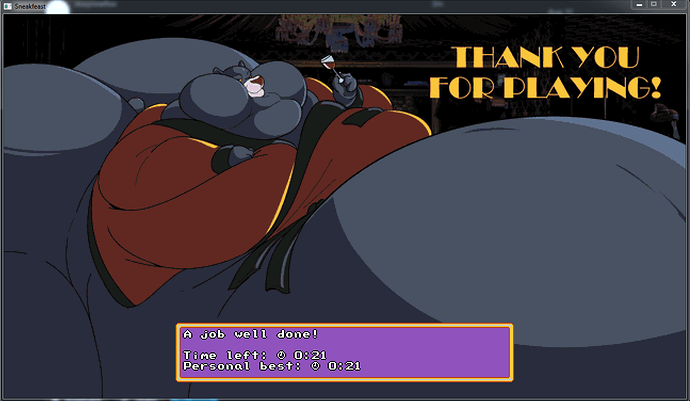 I admit, I have made a few mistakes in execution, but I’ve managed to find the perfect path! However, again, it uses the bug I mentionned earlier. I noticed it happens between the third and sixth meal, which helped with my path!

how long until we get a speedrunning community out of this small game? hah!

Good job! I got the ‘double food’ bug while trying different paths but I haven’t been able to recreate it. I think its to do with the eating sequence or maybe eating as much as you can in the shortest amount of time. Anyway, fun game!!

Yikes, I thought I had fixed that bug. Could you redownload it and try again? Sadly it doesn’t count if you aren’t eating all 15 items.

I’m at work but I can try to squash that pesky bug once and for all when I get home!

Gonna have to suspend this until I make sure it’s not happening anymore, sorry.

Dude, maylowfox earned it. You’ve got to give it up to them. Bug or no bug, they figured it out

You guys did a great job on this!

Aye, for the glitchless run so far, the fastest I could was 14 second. Problem is: I think as far as I could go, the way the map is done forces me to do a detour in one part to get as much optimisation, so I lose about 6-7 second or so doing a glitchless run.I’ll run again and see what’s the highest I can go!

And yeah, if I go for “All food%” the glitch can even be more harmful, setting me in the next weight class before I want it to happen, argh! Still fun, nonetheless!

Glad you’re into the game we made! I’m feeling pretty foolish for encouraging speed running while game breaking bugs are still present (which I thought I’d fixed) but I’ll try my best to fix it tonight after work.

No problems! I’ll gladly help and show the path I used once the patch is on! Maybe that also could help people to see how I got the current “glitchless” run and time, hah!

Hi, I’ve just tried out the latest build to see if I could get a good time, but I ended up finding that pressing Q, W, and E manually adjusts your weight to stages 1, 2, and 3 respectively. I feel like that’d need to be fixed soon. Otherwise, great game, I really enjoy it!

I fixed the remaining bugs with duplicate food NPC activations, and removed the debug keys (seriously kicking myself for letting that slip)

Update should be up in a little while!

Alright, it’s up. Do your worst!

Edit:
Double consuming food bug is still present, and at this point I’m chalking it up to the game engine since there’s nothing with my code that would cause it to randomly happen. Don’t make non-RPGs in RPG engines, kids.

Edit 8/14/19, since it won’t let me post again:
Now that I’m fairly certain the bugs are fixed (I played both game modes over 10x in a row each without the double food glitch happening) I can confidently resume the offer to draw a simple 3-frame sprite for whoever can beat time attack with at least 20 seconds to spare and is the first to post a screenshot. If no one is able to pull it off by the end of the week, i.e. end of Saturday night 8/17, the sprite goes to Maylow Fox by default. Maylow Fox is of course welcome to redo it with the fixed version to claim the prize. Have fun! 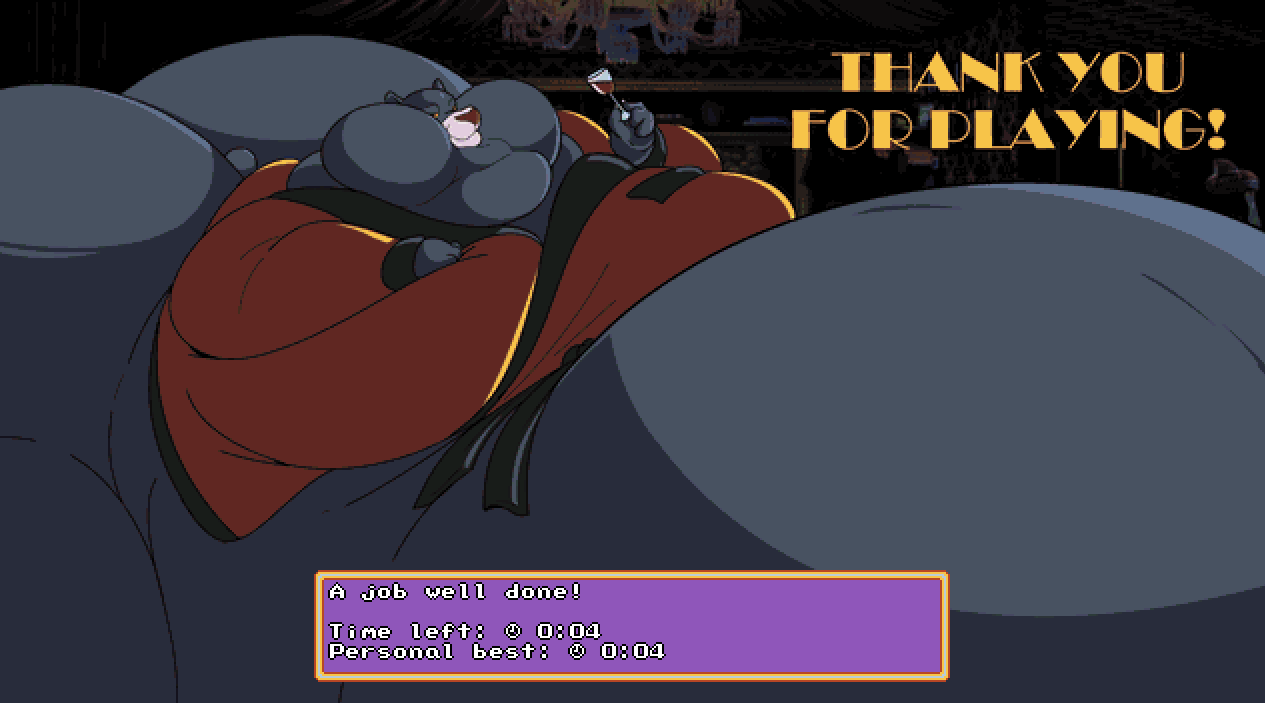 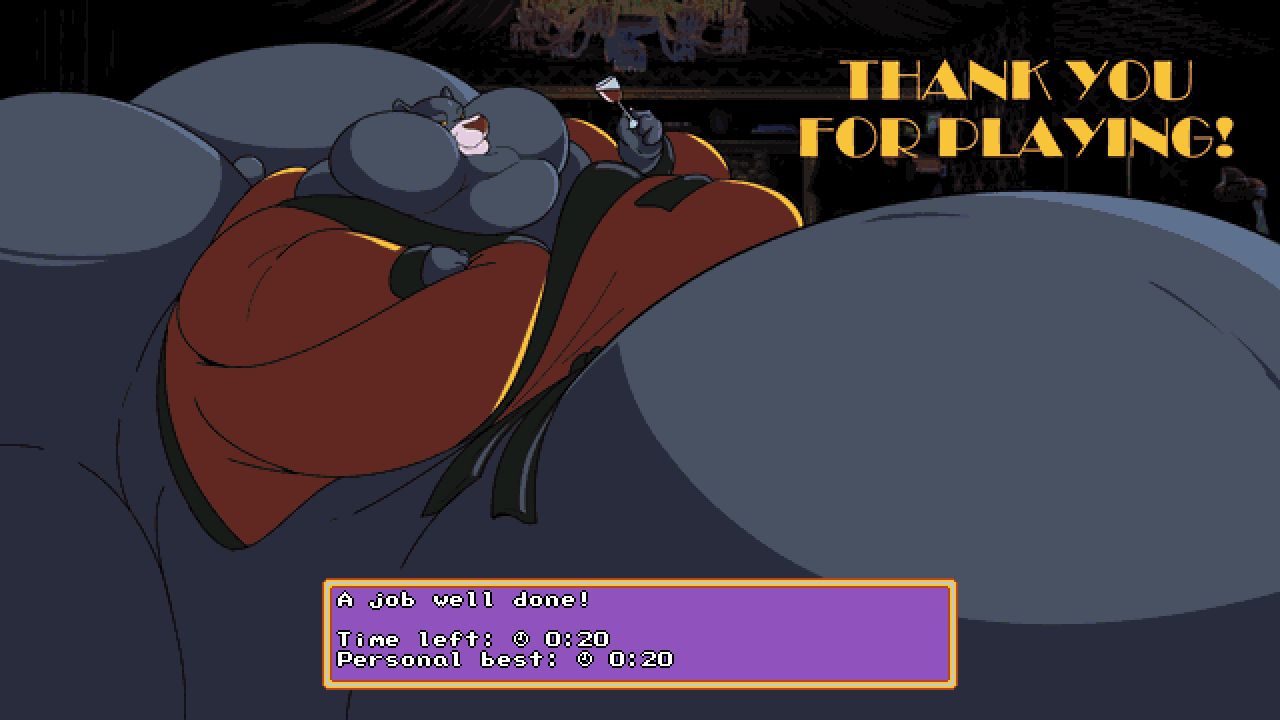