Unfortunately you can’t export to mac from windows. Not sure why gamemaker is made that way, but thems the breaks.

Just got done playing this bad boy, though the thing is, at least how I played it, I was surprised this wasn’t something I could beat in one sitting, though now I’m curious whether or not there’s a cap on capacity increases, I mean you have to at some point, right? Or else you’d just be standing there bigger than the planet itself with your foot caught in that crater. I’m already having a hard time making precise selections from how much distance my character’s gait covers. Heard about this from seeing a thread on the sequel, so I guess I’ve got that to look forward to!

This is alot better than I originally expected.

The concept is preety clever and it has alot of new game plus like elements so despite it’s linear activities, it remains replayable. I definatelly will keep a close eye for your future releases.

The game seems to be crashing sometimes when choosing the new game plus a second time. It might be rare however. The game also becomes alot harder to store energy at later stages, I move slightly and I lose about one third of the bar while having to wait 10 minutes to gain full bar with 15 reactors.

So uh… I am no planet chartographer but is that classified as a mountain? 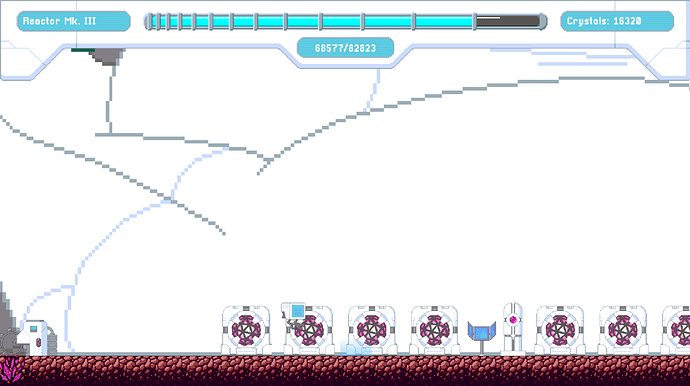 is it intended for the slimes to be able to just rush past walls? Some of them ignore everything until they reach a mine while others do still stop at the wall.
Either way it should be fixed, or at least there should be something the player can do about it, like building more turrets, which doesn’t really work right now as there isn’t enough space

Gray slimes completely ignore all defensive structures, the only way to deal with them is to kill them. I mainly put those in to make sure you have to think about putting a laser or two inside your base rather than just on the walls.