The Curse of Something: A RPG Game About Large Furry Men

Play The Curse of Something

Yo! Welcome to The Curse of Something - a very special text-adventure/rpg game about growin’ huge!

Live the life of someone afflicted with a curse that either makes you super fat or ultra buff. You can go out into the woods and fight monsters, or talk to them and try to make friends - or fuck them. 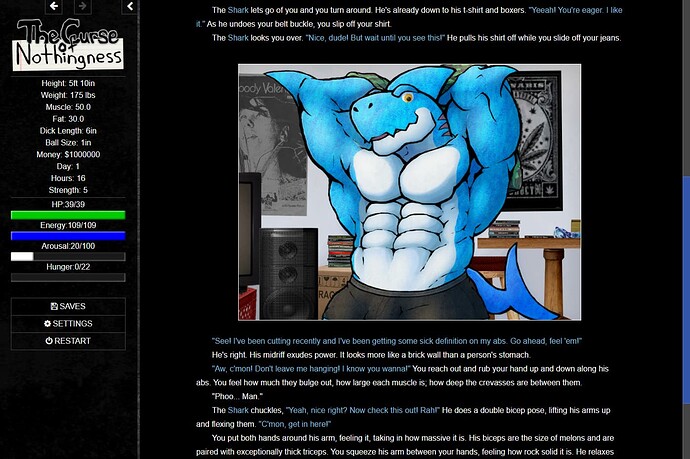 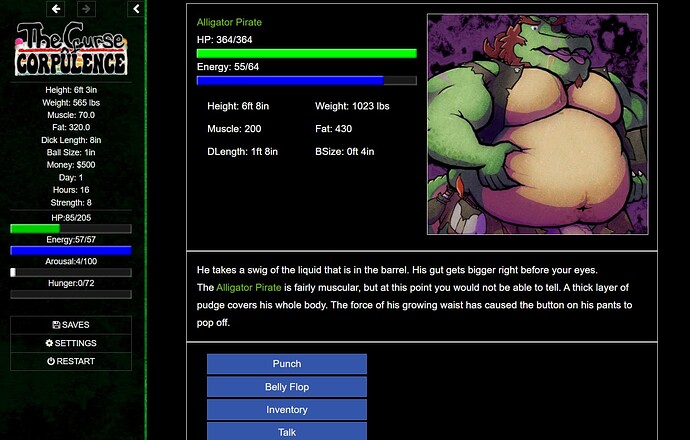 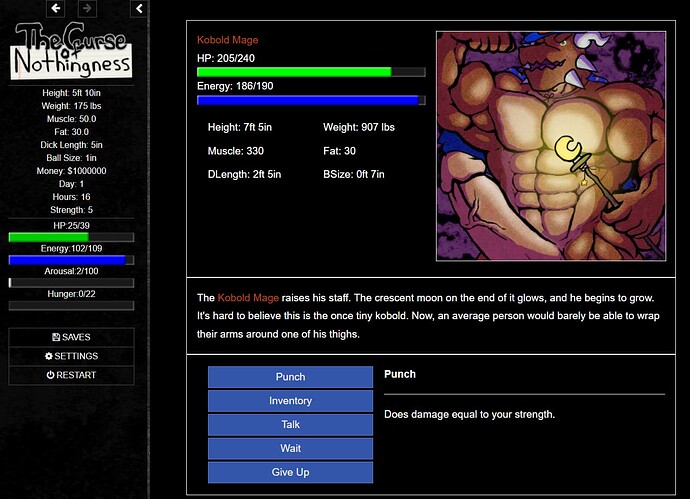 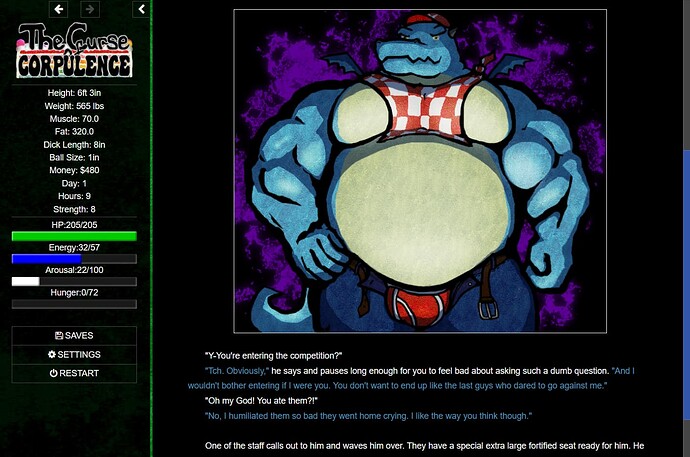 And you can play for free!

Just come here: The Curse Of Something by MCRugerMasta

The game will be updated every month, and if you’re very nice you can subscribe to my Patreon to get updates a month in advance! The Patreon version has a new enemy: The Cobra Warlock. He infects you with a fattening venom and gains power the fatter you become.

***** To anyone that has an issue where itch.io says your pledge is too low, send me a message on Patreon and I’ll help you out.

I gotz to big for the apartment, and had to go live in da woods.

Though in seriousness, I feel like the height pills being only one inch and you don’t get anymore once you run out is kind of a pain tbh. I get Big but I don’t want to be super big.

this is alot of quite a nice little text game though you could do some balancing with the forest in the beginning and early game, that place is brutal

True. The forest is pretty brutal in the beginning, but instead of making the enemies easier, I would rather make it a bit quicker to grow when you’re just starting out.

I’m really enjoying this game, can’t wait to see more of it, honestly.

Thanks! Glad you liked it.

Pretty fun game so far, really looking forward to future updates for it! I guess it’s kind of early for me to have a definitive impression on it so far, but I definitely enjoy that it’s fairly possible to see much of the content right away without having to grind for hours on end.

I’d say my favorite thing so far though is the growth mechanic with the Forest Knight, which I only found out because he was too precious to beat up when I first encountered him~

You have something great here and hoping for it to grow bigger. Is the alligator pirate the only one who can grow fatter? Do you have plans to do more weight gain for enemies or for them to cause the player to gain?

If you found the Vampire Bat, he’s another enemy that can grow fatter. Also next month, in the Patreon version I’ll be releasing the Cobra Warlock and he’s focused on making the player fatter.

Why isn’t the option to run away available when you enter the fight? You could make it even more interesting if there is a random chance your foe catches you and makes you pay by enhancing or decreasing the curse’s effect based upon which kind of curse it is.

Love this game. I maaaaay have stayed up until 2 AM playing it last night because my dumbass character was on A Roll.

One thing I’m wondering, though - I’m having trouble figuring out what to do with the book after reading it. The instructions seem to imply something to do with the dick curse guy; do I have to activate his orbs?

I spent a good while reading it, to the point where I got the “something happened” message and the weird e-mail, but I can’t figure out where to go from there.

Oh, haha. Then you can check your messages at the computer

Yeah, I did, that’s the weird e-mail I was talking about

Oh, my bad. Um, if you’ve failed a pact at the temple, go back there and use the word from the email when you meditate

Is there anything else to come out of the Cursed Book? I’m trying to understand it as well, haha - got the mantra word though.