At long last, I’ve finally organised a demo for the dating sim I’ve been working on for…quite a while now. I had to put off publishing the demo due to some unforeseen circumstances, but things are all good now and the game is back on track!

I’ve finally updated the patreon intro! It now actually depicts my current plans and provides info on the current update, as well as what to expect from the next update! 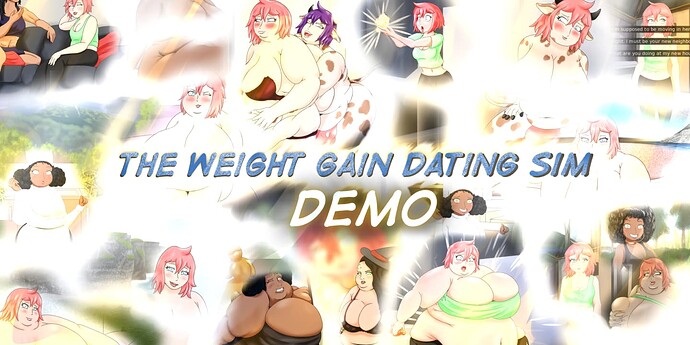 I know many of you have been waiting patiently, so here it is:

The game can’t continue forward without support, so if you want to see the project reach its full potential, please support it on patreon:

Patreon supporters get access to the full version of the game, which is updated and expanded monthly. The full game currently has almost a dozen additional weight gain scenes, as well as an additional dateable character, Chloe!

Another character, Flora, will be added to the game in the monthly update for September!

Patrons also assist in the development of the game, with standard patrons getting to participate in polls that determine the focus of the game, and higher tier patrons taking part in discussions on new storyline ideas, or even helping to design new characters for the game!

I hope you have fun with the demo!

Tried out the demo and was very pleased with what it offered so far. I especially like the variety in the stories. Will definitely keep an eye on this one.

Your arts really improved a lot over the years, and I dig your writing style! I’ve definitely got my eye on this project

So I’ve been wanting to say I’ve been playing since this project started.I’ve been wondering how are you keeping up with what choice lead to where?The reason I asked is I’ve never been able to figure out how to get to a couple of them mainly the future emily.I’d also like to say I’d love to see more of Roxanne!

Having played the demo, the first thing I want to do is applaud the sheer variety you have crammed into this game for 1 character alone. It’s quite impressive how you have gone down multiple paths with a bunch of unique art, and how very creative some of them are, like the soda routes. And all of them were quite enjoyable in their own rights, too!

Now, maybe this is the nature of having played only the demo version, but outside of a couple choices that branch within in their respective story-lines, it felt like more like I was playing a “pick a story to read” sim more than a true dating sim. It didn’t really feel like I had a whole lot of impact on a path after the first few choices. Again, perhaps you have some more complexity in the Patreon-only versions, but here it just feels a little underwhelming as a “game”.

Overall, though, I have to say I enjoyed it quite a bit and am definitely interested in how it progresses!

It has moved towards more of a “branching stories visual novel” than a traditional dating sim throughout development. I had very early builds that were more standard and they just didn’t fit very well, so it’s focused more on this. I’m hoping to go back to some of those mechanics in the future though, if possible.

Now, maybe this is the nature of having played only the demo version, but outside of a couple choices that branch within in their respective story-lines, it felt like more like I was playing a “pick a story to read” sim more than a true dating sim. It didn’t really feel like I had a whole lot of impact on a path after the first few choices. Again, perhaps you have some more complexity in the Patreon-only versions, but here it just feels a little underwhelming as a “game”.

I think that’s what turned me off to the original game when it came out, I went into it expecting a dating sim, but it was more akin to a CYOA. In hindsight it should have been more obvious as with who the dev is, as Damarcus’s DA is like that in general and then kind of vibe, they and their fans/supporters go for. I’ve always loved the art style and cgs as they are nice and varied, but I was hoping for a dating sim where you chose your love interest(s) and well simulate dating a girl that is going to gain weight over the relationship. Rather than a what I think the game is currently which is a chose your ending simulator.

They are very unique, different plot lines though and this is differently not something that is done often (at least visually) within games on the site. And with the number of choices, they often have a puzzle like element to some of the storylines to see all of the branches.

I think you both make some solid points here. It is probably a good time to rename the project, “the weight gain dating sim” was only picked because I couldn’t think of much else at the time.

There are two downloads within the download link. One is Mac and the other is for PC (windows). If you downloaded the game and can’t get it to play check which version you have.

this hound says thank you, was just a little uncertain since few on the site use the term pc for windows was a little confused

It is used that way at times I would say. IBM incorporated the term PC into their brand names back in the day. And apple always used the term personal computers as to not infringe on that. So, a lot of times the term PC is used to contrast apple. With the rise of Microsoft dominating the market in the 90’s I think Windows just took over that “PC” terminology for people as it could be used to describe windows operating systems. Now, it’s still the same to me any context of PC is always to indicate not Mac. So normally you can always assume someone is referring to PC as windows os. Rant over.