A simple game about belly stuffing, posting here in case anyone is interested, the game is moddable , you can add custom hairs and clothes by adding them to the data folder , templates are included along with a modding guide , any feedback is appreciated 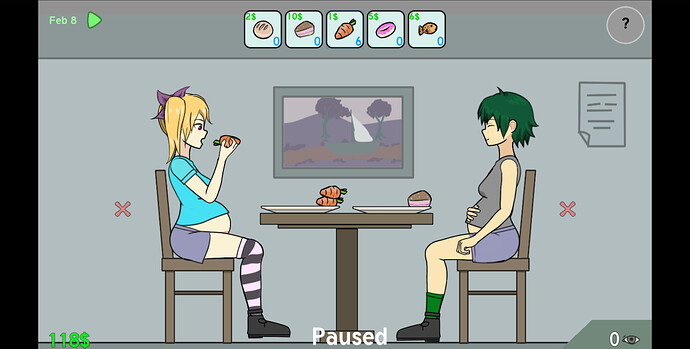 I remember a game similar to this, if I recall it had spaceships based minigame as part of it.

yes, It was a previous project , I decided to split it and this only has the eating part, I want to make a space shooter later, but with the stuffing or weight gain implemented in it and not just as a side thing…

Hey I remember you as well!
Loved that space shooter game
It’s amazing to see you here, I’ll make sure to take a look at this soon!

Keep up the good work! I’ve been your fan ever since you released your first game

I personally think this game is quite good, here are some comments based on my testing:

The secret to success is carrots essentially, once you get a character to a reasonable size with cakes or similar, you can just feed them carrots to get as much money as possible.

For fun I tried to use DAIN app to make some extra frames and I learned that you can’t make more than the default amount of frames for any of the body parts that support them. Oh well (I thought those extra zeroes meant we could add more y’see).

Had fun so far! I remember the old space shooter version as well, this one seemed a bit easier to understand lol. A few questions:

So, here’s something odd I’ve noticed: because viewers only donate while the girls are eating, it’s most profitable to keep them eating for as long as possible rather than to stuff them ASAP. This means the game actually punishes you for buying pricier foods not only with a bigger price tag, but also lower profits, which reduces your ability to stuff the girls more quickly, which you’d think should be a reward.

In short: eating a fuckton of carrots is good for you.

maybe some burp sfx when full?

Indeed. Perhaps to make this more of a game/challenge, how about a mood gauge for each girl that goes down the longer they keep eating the same foods? Eating the pricier foods would cause their mood to improve. Having mood bottom out could impact viewer count (no one wants to see a grumpy waifu) or perhaps cause a girl to prematurely finish eating for the day.

My own thoughts towards the game is that this makes for a great foundation for a fun dinner conversation simulator. Just imagining that with each capacity level up unlocks a new personality trait for a waifu, good or bad, so overtime the girl gets a more complex personality - be it from liking and disliking certain foods to compatibility between certain waifus, or even preference to working alone or with company.

Traits can also unlock conversation topics; the girls could also have Sims-style conversation with one another (or with the audience if solo) that can help maintain viewership and improve mood. Even talking about their own stuffed state if they’re into that thing!

I think in a way, the additional cost is OUR time and patience.

I definitely would’ve enjoyed it more if increasing the level would also increase the weight, but other than that this is a pretty good game

As of writing, max capacity is 20.

Alrighty, got 2 to the max and one halfway or so… seems like long enough to comment on the game so far.
First off, I’ll start with a positive note: I absolutely loved it so far.
I started my little adventure by using the free carrots and let that carry me as far as it would, getting some extra when needed, what the others have said is true, as far as money goes, nothing beats a good carrot.
After a while, I tried the other foods and settled on using the cake… (almost) exclusively.
Saved loads of time and money wasn’t an issue anymore, it kept pouring in even though the days were as short as they were gonna get, so cakes it was.
So many cakes…

Ahem… anyway
The only ‘negative’ point for me was the repetition from the moment I chose to make the cakes, to try and mix things up a little I tried to make the other foods, but there was no real point to it, aside from having a slightly different minigame.
start day, do the cake minigame 10 times or so, throw them onto the plates and let the rest play out.
Which isn’t an extremely bad thing, but maybe it’d be an idea to get a cook at some point or so, later in the game of course. Where you’d have to pay extra, but get to skip the minigame. (maybe some other twists to it as well? idk, we’ll see how things change from here on out). Gives the option to get the repetition out of the way, gives a way to spend all that excess money, stuff like that!

Oh! and maybe have some preset waifus, There are the 4 preset hairstyles of course, but maybe have the characters as a whole as a preset somewhere?

And all the things @AlexKay said, I won’t repeat it, but those are some amazing ideas and would definitely add a lot

I will echo everyone thoughts on the higher cost foods being somewhat worthless for the time involved making them. I honestly just spammed donuts/carrots.

Other than that though this is pretty amazing.

So, since this has been brought up a few times since my initial post, I figured it’d be more constructive to try and come up with solutions rather than just more complaints. Right now, the game incentivizes you to spend a lot on cheap food for longer stuffing sessions, so there’s a few options to circumvent that:

EDIT: Also, it would be useful to see our list of girls while both seats are occupied.

Weight gain would be difficult considering how this game handles customisation, if you go into the datafiles you’ll see what I mean.

It looks like it’d take more assets, I think? But I believe OP expressed interest in WG content in general, if not for this game. I think that, food balance aside, adding more features would be the way to continue with this game, provided OP intends to continue with this and it’s not just supposed to be this small-ish minigame.

Also, while in the game’s files, I noticed that there’s actually an unused file for bottoms in bottoms1, and if you add more images, the game can’t use them. And what are the TEMPLATE files used for? Does the game use them at all, or were they just for dev purposes?

it is not unused, but the customizer will show you only compatible options, bottoms1 depends on waist , check the file “MODDING GUIDE.txt” for more details, the templates are , well, templates, and you can use them as references if you want to make custom clothing or hair (or even eye styles)

exactly!, but I plan on adding weight gain to other games