December 2nd, 2021: This is a belated announcement that a small bugfix patch for the Iron Gut HUD glitch is available on DA or via the Axu2 discord! Some small residual bugs have been reported regarding the contest, but entering the world map should clear those up along with any previous visual bugs! I’ll keep working on cleaning up the contest visuals for the next patch!

October 22nd, 2021: I’ve uploaded a small bugfix patch with a tiny bit of new content and miscellaneous tweaks. Remember to copy/paste your old saves into the new Axu2 game folder once you’ve downloaded the latest version! 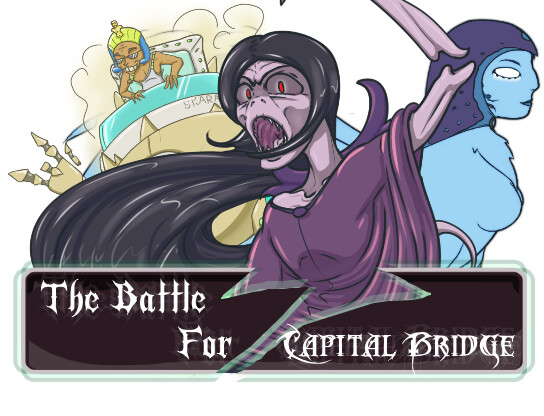 Teasers for the latest update are on my Ko-Fi! https://ko-fi.com/axlwisp If you’ve enjoyed Axugaem2 and want to support its development, you’re welcome to donate, or get involved with the community on the discord! Axugaem2 Testers Inc

-The Battle for Capital Bridge can now be completed! Fight through Guscorp’s forces, including three new bosses (and potentially more), to stop their march against the desert pigmen once and for all!
-The battle will alter slightly depending on miscellaneous factors such as party roster and relationship
status.
-Cross will join the party permanently following the battle!
-All existing whirlwind locations can now be activated with Cross in the party! SEVERAL new areas,
treasures, and events are now discoverable via these whirlwinds, including but not limited to new
maps in Costa Del Nyan, the Thunder Highlands, and Blackhollow!

-Added Renee’s Cafe, a coffee shop in Costa Del Nyan that you’ll need Cross in order to access!
-The Cafe currently has a few small events and character interactions, as well as some blatant fanservice that can be accessed if Claire isn’t currently dating anyone (except Vespa, who is totally there for it if you go talk to her first.)
-More will be added to the location in coming updates~

-Added a couple of new relics (and made one which was already implemented finally accessible via the permanent addition of Cross to the party.)

-Added some new readable books to the game: Siraly the Red, and The Lost City (Parts One to Four)!
-Siraly the Red is a single-volume biographical interview with an anonymous former crew member. It can be found in Verloc Books in Crabshoot Bay.
-The Lost City is a four-part story scattered across Imperium. Part One can be found in the training room at Bablo’s Dojo. The rest can be found in areas related to mining and/or Spiters. Find all four parts for a small reward!

-Added a quest exclusive to dating Abby which can be accessed, after recruiting Elmira and discovering the location of Lilith’s ship, by asking Abby about jobs.

-Nell is now dateable (if you chose her route at the start of the game)! She will offer to date Claire on Capital Bridge once the battle has concluded -regardless of approval rating- if Claire has not chosen to date anyone else. This means she can now equip panties if chosen to date!
-Added plenty of new relationship dialogue for Nell, as well as a quest exclusive to dating her, which can be found by talking to her in the tent.
-Nell can now gain weight (I’ll let you all discover how to make that happen on your own~)
-Added a side area in Grunk Forest that is accessible during the opening of the game. If Diet Mode is not enabled, the area will contain a small (fanservice) scene involving Nell!

-Cedric can now gain weight via very, very specific circumstances tied to one of the new whirlwind destinations!
-Incidentally, added a couple of new relationship events for him in said location.

-Added two new dates and related sidequests for Vespa/Leslie!
-Go shark fishing in Blackhand Cove and Search for a Ghost Ship (both currently exclusive to Vespa’s Leslie relationship path) in the hunt for rare ingredients!
-Create the perfect evening for Leslie and further her and Vespa’s relationship for exclusive rewards!
-Added a fishernyan near the fishing rod stand on the Costa Del Nyan waterfront who sells Trade Sea Snapper, but not for cheap!
-Added some more fishing spots to the beach behind Leslie’s House, and one more to the Del Nyan Waterfront.

-Added a third Iron Gut Contest on the Del Nyan Waterfront which will become available after the Battle for Capital Bridge has concluded!
-The contest will change slightly and possibly even become more difficult depending on Vespa’s relationship with Leslie when attempted.

-Added some helpful functionality to the Iron Gut contests!
-Added a HUD during each contest that actively tracks dishes eaten, bloat meter, and character size!
-You can now replay a lost contest (for a small fee) until you beat it!

-Reworked and added new functionality to the Devour skill/mechanic!
-Changed the ability’s cost from 40 MP to 30 TP, and removed its initial damaging effect.
-Devour now has an 80% chance to succeed in swallowing the targeted enemy! Swallowed enemies will suffer immobilization and a heavily damaging ‘digestion’ debuff for 5 turns or until they reach 0 HP.
-Successfully swallowing an enemy applies the ‘Digesting’ state to the user for 5 turns! This state slows the user to a crawl but increases their HRG (HP Regeneration) by 5% as they digest!
-This functionality will not trigger in Diet Mode.
-Split the Devour skill into separate skills for Nell and Vespa (functionally identical except for the attached common events.) Adjusted the skill ticket’s common event accordingly.
-If you have already taught Vespa Devour, returning to the world map will replace the old version in her skillset with the new one! (The skill will be glitched and think Nell is doing the devouring until you do this.)
-Added a handful of minor battle interactions that occur at the end of turn when Nell and/or Vespa have eaten one of the following enemies:
-Fire elemental sprites/igniters/knights and their bewitched variants
-Will o’ Wisps (but only the ones that aren’t on their own)
-Angels (Vespa only)
-The female Blightwood Vampire, but only in certain troops (Vespa only. Won’t work if there’s another Blightwood Vampire in the troop since I didn’t have time to implement this one fully.)
-There’s only a few of these at the moment, but I’ll likely add more with future updates!

-Added an event post-Capital Bridge that will lead to the option to teach Nell or Vespa Max Devour!
-One Fae Aspect is needed to teach this ability to a party member (One per party member).
-Max Devour costs 88 TP. When used in battle, it will attempt to swallow every enemy at once! (Max Devour will not work on enemies immune to ‘deathmark’ abilities, namely bosses.)
-The above event and the Max Devour skill will not trigger in Diet Mode.

-Angelic Infantry, Merfolk Shellshingers/Worshippers/Retainers (Female), Guscorp Rear Guards and Guscorp Battle-Shamans can now be visibly fattened!
-Mercy, Fang, and Maddie (if you choose to fight her on Capital Bridge) can now also be visibly (and permanently) fattened!

Full patchnotes on the Axu2 DeviantArt post and as a text doc. in the game folder! 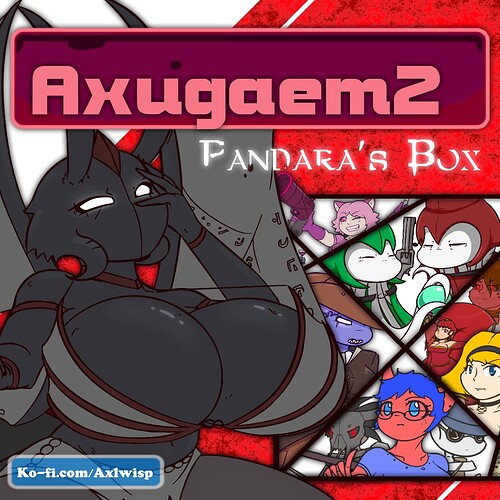 Axu2thumb1080×1080 136 KB
(NEW! Axugaem 2 v.0.6.2 - Iron Gut HUD Bugfix Patch by Axlwisp on DeviantArt)
An amnesiac from nowhere, a grieving bone golem, and a hyperactive mutant catgirl set out on a quest across the wild and unpredictable world of Imperium to reunite lost friends and stop a pending demonic invasion.

Hey Weight Gaming, Axlwisp here! Above is the page for my RPG. It’s set in the quirky, fantastical world of Imperium, features a long and replayable storyline, and has many cute fatties, some of whom even gain weight over the course of the game. The enemies are all drawn by myself, and most of the sprites are original and made either by myself or someone working on sprites specifically for Axugaem. The game does contain depictions of vore, so be warned. If you don’t like being eaten by enemies and you don’t really care about seeing characters blimp up, you can consider enabling Diet Mode, which skips over most fetish content.

If that sounds too good to be true, you’re half-right! The game’s not finished, but it is playable, and I’m updating it constantly. My ultimate goal is to get this on Steam, but due both to how big the project is and to my busy schedule, that goal is a few years off. If you like story/character driven games with some fun and cute belly shenanigans thrown in the mix, give the game a shot! I’m always looking for input from people who are passionate about game design~

If you’re looking for a finished game, check out the original Axugaem. It’s non-canon and outdated (characters are no longer based off Pokemon and Minecraft) but I’m very proud of it, and its story is tied to Axugaem2’s story, in a way. You can find the game here: Axugaem (Version 1.0) by Axlwisp on DeviantArt

Also, if you like VTubers, consider following Lamel from Axugaem2 on Youtube! (Yes, I’m serious, this is a thing.) https://www.youtube.com/channel/UCOhw0Ek0dfwDokdau7w0Gcg 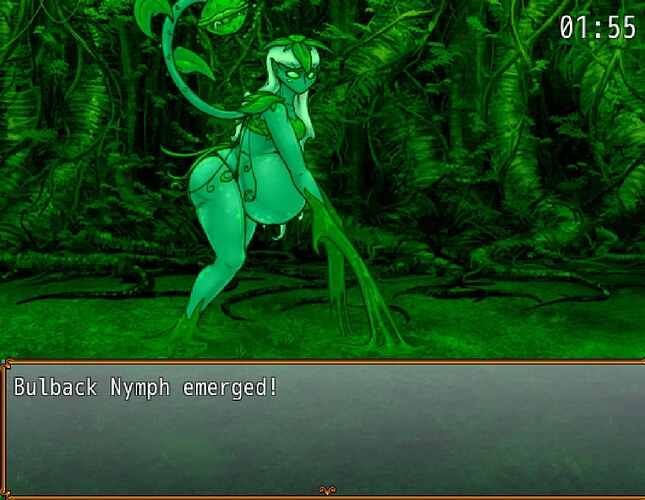 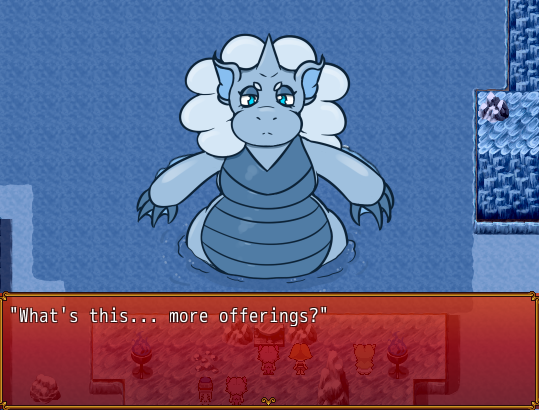 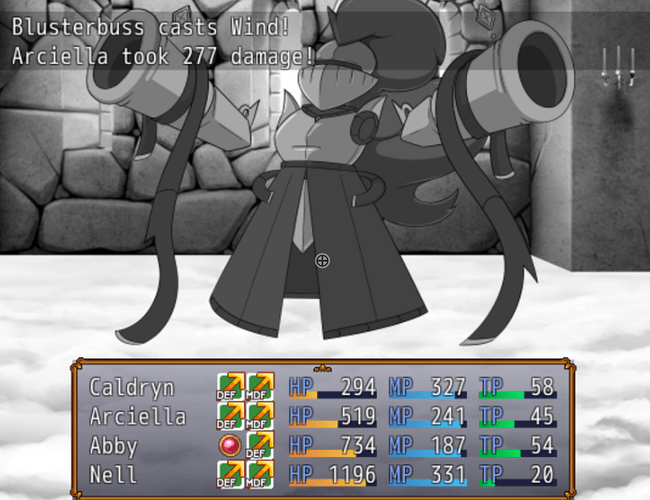 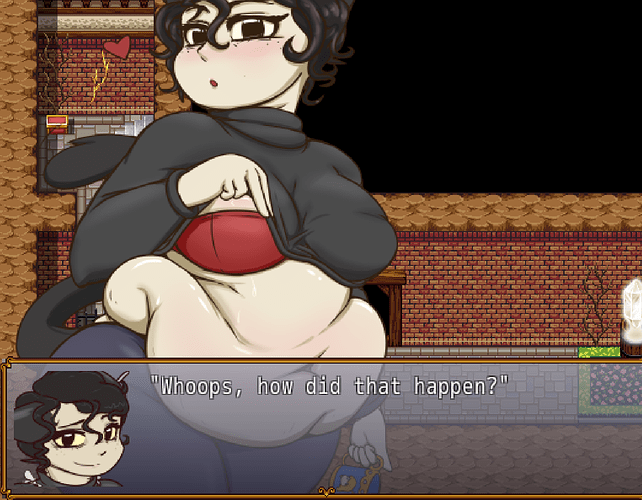 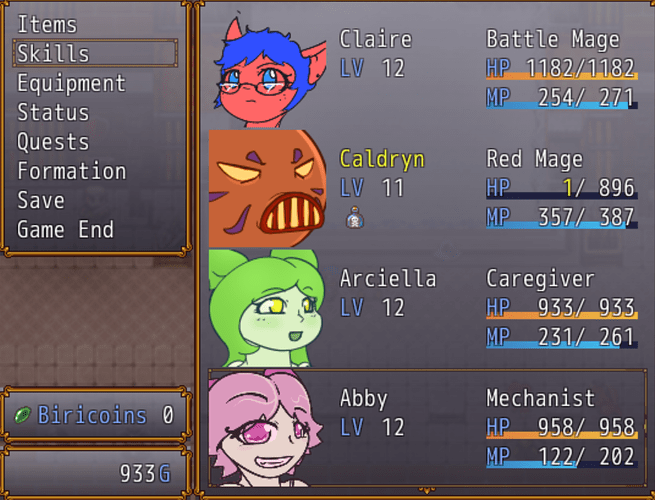 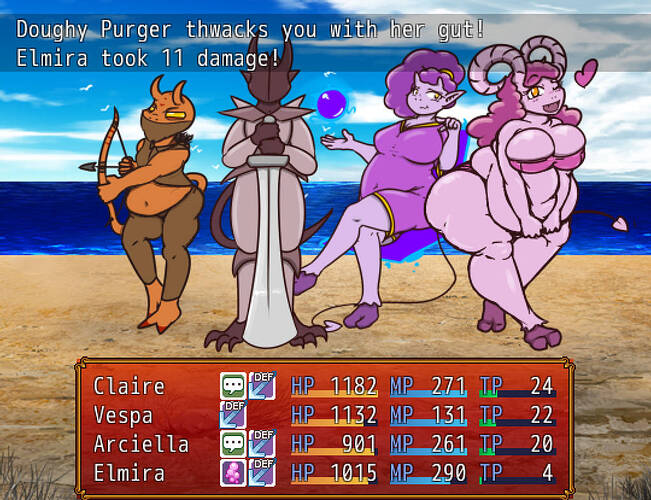 I recognize you from deviantart, and the fact that you’re making games is quite tantalizing! I’ll get around to playing for feedback ASAP.

Yo, welcome to the forum, dude! What a debut!

Thanks! Joined about a year ago and forgot to follow up until recently. So nice to see a community like this on the net~

Update: We now have a Discord. Feel free to join if you’re interested in keeping up with the discussion, or want to get more into testing~ Axugaem2 Testers Inc

Alrighty, I’ve started playing the game, and so far, it’s damn impressive! RPG maker in general is rather limited in what it can do, but you managed to make something quite unique! Focusing on the character sprites shows some quality sprites, and the writing has that level of punch, humor and personality that basically required by law for fetish games.

I’ve only made it to the Tower City so far, but I wasn’t expecting nearly as much as this! A pat on the back, sir!

Thanks! Believe me, I’m feeling the engine’s limitations, but I’m doing the best I can with it~ Thanks so much for giving the game a shot!

I played this a while back, pretty neat and intricate, though I don’t think I ever finished it entirely. It’s fun though, 10/10 art and character design.

Hey folks! It’s been a while! I’m giving this post a bump to notify you all that The Fire Update’s here! This is a massive update with a ton of new features, and I’m hype as hecc to share it with you! I’ve updated the original post with the link and some screenshots. Have a great May!
-Axl

Where are you struggling?

Walkthroughs are still a work in progress, but if you follow the link to Deviantart, hop on the discord through the link provided there and let us know where you’re having trouble, we should be able to help.

Yep
ehh is not the correct code, I tried to change it too it didn’t work lul…