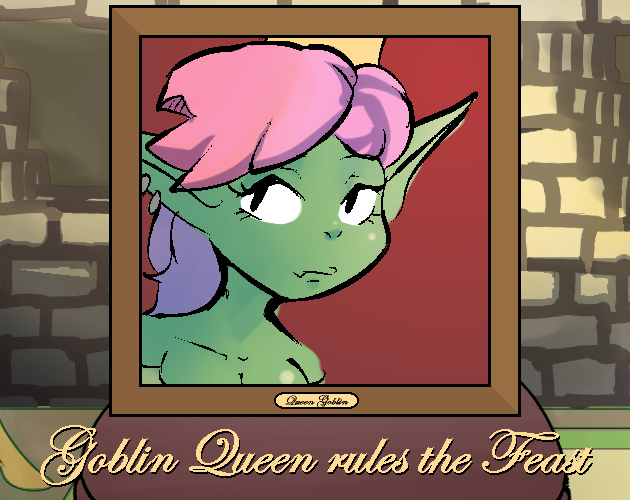 Here it is! My entry for the 2021 Gain Jam. In this Hands Off themed choices game, play as a Queen Goblin with no political power. Use only your charm to survive.

CONTROLS:
arrow keys: select option
Z: confirm selection.
num 1-4: select + confirm option.
You can also use the mouse.
Touch controls are …mostly supported. Just make sure to drag you finger from outside the speech bubble, to the option you want. and confirm by touch the Queen’s face.

I did all the all the programming and some of the art (GDevelop is neat, if a little underdone.) CJ did most the art.

I guess, I unlocked the endless mode. 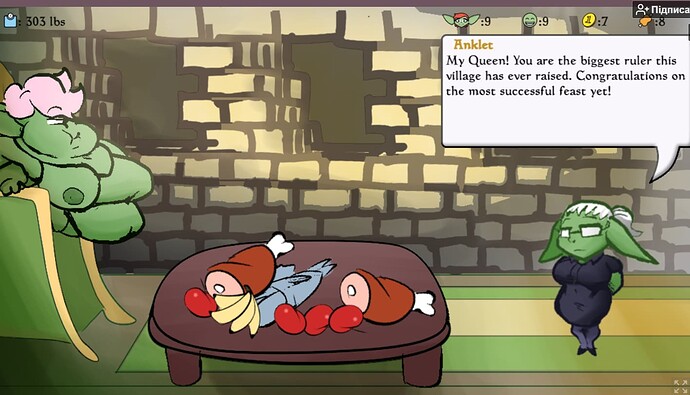 Does the game end at that point? I can’t continue past it

This is pretty good, though it’s unclear how long a playthrough lasts, or what most effects of your options are.
Some Feedback:

Yip (yip yip), seems to end there. Though I got a final weight of 305 lbs (bow down to my majesty, Goof! Bwahaha) 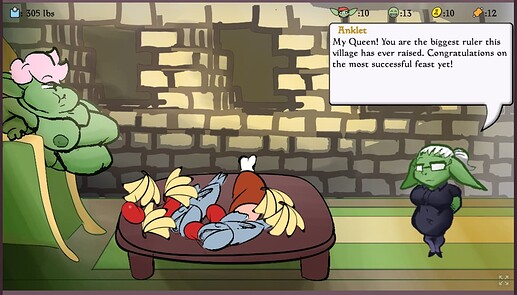 A solid and clean entry! Nice music and visuals, no immediate hitches or bugs. Just solid all round!

An aside: With another light medieval themed game involving feeding a queen, it amuses me to think of a crossover with Roops’ Feed the Crown, creating a collective “queen-verse” where all these corpulent queens reside.

I seem to have hit a softlock. 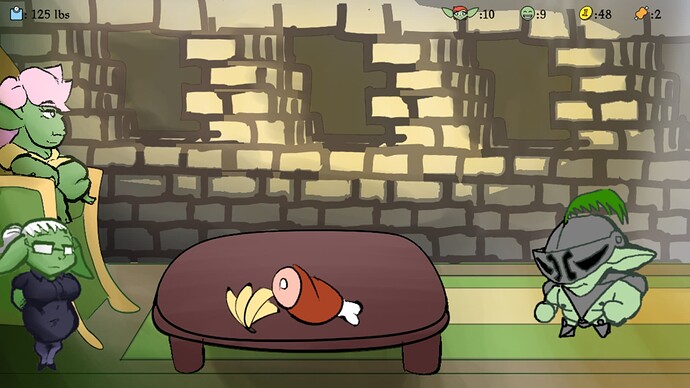 This one was an absolutely gem.

Did find two of what I thought were glitches, I told the knight not to attack the guy turning people into pumpkins but he fought him anyway. Also the incense didn’t seem to work more then once on the dragon.

Overall though, this was utterly charming. I love the character designs and the Sort the Court style gameplay, and the characters are all cute as heck.

I hit the same soft lock as @chilmistressfreia 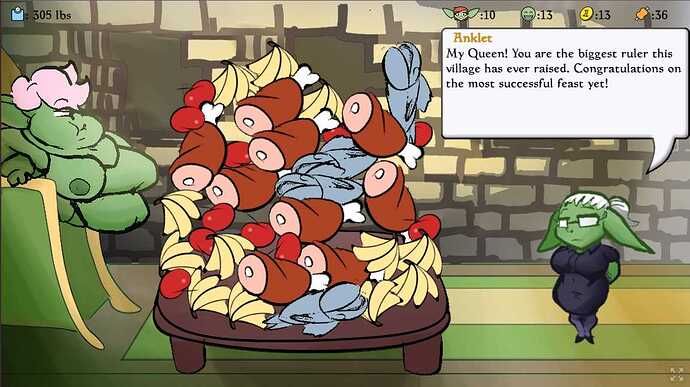 I am honestly surprised at how much this table can hold

will there be a downloadable version?

real fun, real cute. Only note is that the knight appearing sometimes freezes the game

Thank you for the screen shot. I was able to find the bug from this and fix it.

It not a bad game it is quick and enjoyable but there need to be more bad choose that loss you money and food just to make it a bit harder and also a way to sell your food to get gold.

I’ve already kinda covered it elsewhere, so I’ll be pretty short here, but this game is another one of the ones from the jam that I really like.
If I had to dredge up some complaints, it’s pretty much the same as the posts above, the knight bug, the ending being a softlock loop, whatever… but those were fixed in the time between when I played the game last and now, so eh.

If the game gets developed in the future:

I don’t have much to say that hasn’t already been said. I just wanted to say that I really enjoyed this entry, and an expanded version of this would be really cool to see! Just more options, a bit more to the balancing act, and a longer runtime would be enough for me. True forks in the road would be really neat to see. I don’t think the game needs to exactly be harder, just more varied.

If I had any criticism outside of the aforementioned bugs, it would maybe be that the Queen’s side facing sprite feels a little off. Mostly in the face? The characters chin basically curls into the neck and the “upper lip” area is a little bulbous, typically the area between the lip and the nose is more concave. I really only mention this because for the most part I like the art and felt like this was just a little something that could be improved.

Great work, I enjoyed the game a lot.

This was a wonderful experience! My favorite entry so far!

Definitely ‘reigns’ vibe from this. Well made, and good use of stories of reoccurring characters.

I loved this. So much potential here to “expand” and add many storylines if desired. The goblin queen’s profile/bust is immensely cute. The other art is a little rough, but gets the point across and is overall well executed understanding this is a jam and how many assets had to be made extremely quickly. The dialogue was very fun and suitably lighthearted, though one criticism I have is that adding the literal theme as a one-liner was somewhat heavy handed. I do see the humor in that, though, and it didn’t detract from the enjoyment of the game at all. All of the twists and turns were pretty amusing, and some things have me curious enough that I may give it a second playthrough to see what permutations may be possible. Fantastic work!

Fun game to play, queen gets to a certain size and is quick and fun! Good game man! The queen gets pretty damn big and the game is fun, I got 2 endings,

The queen and the dragon and the solo queen
idk if there are other endings` so that’s impressive for a game jam! good quick fun game!

This was SO CUTE!
I adored it! I want to help make content for it! I want it to have a steady stream of expansion packs until the end of time!