First of all, I need to thank @crazyman193 for their thread of a very similar nature. This not only was the thread that inspired me to make this one, but also the one that reminded me of the purpose we all download these mods for these games… to play them!

I don’t know if we are allowed to do this but here it goes: The purpose of this thread is to avoid the Starbound Big Fatties thread from being over saturated with this type of content while still having a place to share what was created. I have already created 2 things (being a bio and a short story) and I want to see what others have created on this mod. Special thanks to @Tag365 for initiating this kind of content and @Cloaker for the idea of this thread. Can’t wait to see what adventures …

An an aspect of playing an action-RPG like Skyrim is to roleplay! Though, as crazyman’s post has proven, you can roleplay in Starbound, but you can also roleplay in Minecraft, with pen and paper, on Discord, or… in the bedroom. Skyrim wouldn’t need to be an RPG in order for you to roleplay in it, it just has some things that help facilitate it over other games, so because I hope that this thread will itself facilitate some really good replies!

This thread is a little different than crazyman’s, though. I wanted to broaden the scope a tad bit so that more people could be included.

Normally, screenshots and videos are something that’s highly popular within Skyrim as you can mod it to look quite pretty, but when my character has a dumptruck so large a hip-check could kill Karstaag, I obviously can’t post that on r/Skyrim, so I wanted to give a place for peoples’ pretty fat screenshots!

What should be posted here?

What shouldn’t be posted here?

Notable Replies Will Be Linked Here For Purposes Of Ease of Reading!

Choelia’s Letters To Her Father

Letter To Marcus Rutilus - I

Hi, dad. Sorry I haven’t wrote to you in a while. You always knew how I liked to spend my freetime when I was young, so I hope you understand that some alone time has done my mind and spirit good, but…

My guys have been kind enough to not mention it, but I know they’ve noticed. I mean, how couldn’t they? I’ve went from a 6 pack to… 600 pounds! 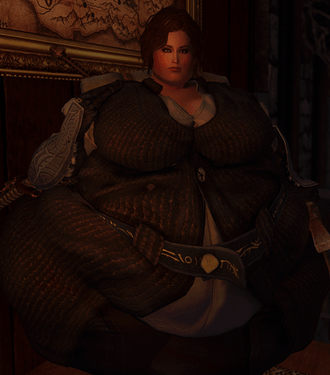 …and before you say it isn’t that bad, it really is. Honestly I don’t know how I had it in me. If any of my peers from The Imperial University got to see me now I think they would be beside themselves after how smug I carried myself. It’s humbled me (a little bit).

Long story short, I’m not the woman I was 6 years ago. Retirement really did me in. Before I’d call them “noodle-armed” because they didn’t have any biceps. Now I call them that for… different reasons. When I was in my prime I was swinging with the best of them. My peers from The Imperial University couldn’t lay a finger on me. There were some places they just wouldn’t go, and even though I had deal with my fair share of liches, and witches, and bit what me and my guild brought to The Imperial Library at the end of the day was always worth it, and all of the guys made coin.

You would think a life of adventuring in your early twenties and making more septims than you’d know how to spend off of priceless Ayleid artifacts would’ve set me for life, but I guess a septim doesn’t go as far as it used to after The Great War, or at least that’s what dad told me. Now I’ve had to come back as acting Guild Master, and start leading expeditions again.

It just bothers me because if I knew that I’d have to go back to work I wouldn wouldn’t’ve I WOULD HAVE STARTED EXERCISING, BY THE NINE! …or I at least would’ve laid off the gemelli… Zenithar knows I won’t be able to get all this weight off… You always knew I took a “smarter not harder” approach to my work, which I learned from the best. 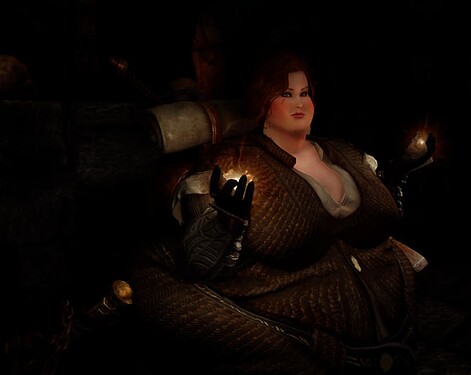 I’m going to be writing to you more often, since I’m going to be pretty homesick doing digs out in Skyrim. Afterall, it was just too good to pass up. Most people are steering clear of Skyrim right now because of the war, but I know there’s a good septim to made here. 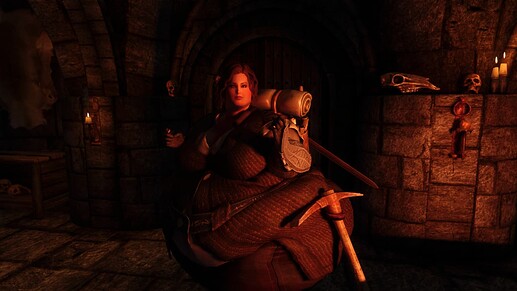 Please let me know how mom and Uncle Jorn are doing.

There are no more letters right now.

What mods are you using here?

To preempt requests for my mods, I’m a bit reluctant to post the specific conversion I’ve made, because:

If you want a technical answer as to what all the fat related stuff is going on here:

You should look out though because I plan to make a post about a lot of good mods for Skyrim SE. Just, like I said, I have a lot on my plate.

I’ve actually just recently decided to start taking random Skyrim screenshots and attaching little stories to them, uploading them over to my FurAffinity because by god was I going to find ways to actually make my profile useful for once beyond serving as a collection of favorites :P.

Since I’m creatively spent at the moment in terms of writing though, I’ll just post some screenshots, and attach the short stories of varying lengths from the upload descriptions – I’m an ‘okay’ writer at best, so bear with me.

Some are also “sequels” to prior uploads, so the stories may not make sense without the context of prior uploads…oops.

I’ve also been keeping a mod list of sorts, but actually in the process of migrating everything over to a google doc so that I can actually speak about why I’m using each mod. It’s more male-oriented, but plenty of things in there that can be useful for female-based modding too, if people are on the hunt for recommendations!

Just letting people know, the adventures of Chloelia Ahenobarbus Rutilus are probably going to be halted for a little while, as Skyrim Together’s release has sparked me to want to restart my modlist, but with that will likely come a greater variety of characters including a certain Khajiiti scam artist, a Skaal woman, and a couple of other surprises along the way. Chloelia will return however, just probably a bit different.

Sorry for the abrupt end for now, but Skyrim Together’s release was also quite abrupt as well, and I kind of made a rash judgment, but it definitely will make my further posts here much more dynamic and varied.

This post will be deleted/edited when more posts are made.