It’s Valentine’s day at the Shibō mansion and all the maids are gifting each other chocolates! Run around the place, collect candies and feed them to someone you like. 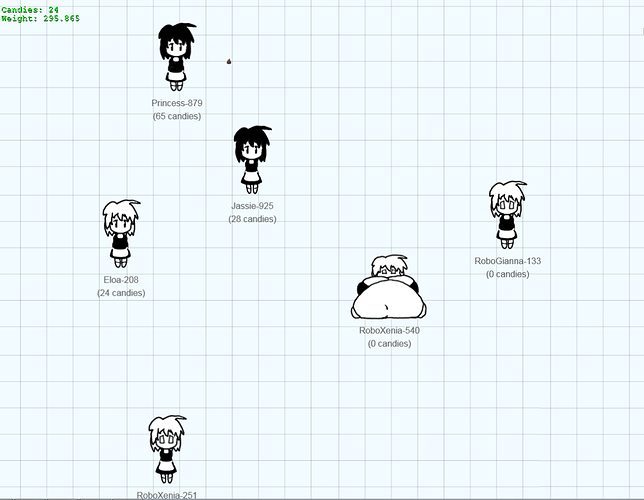 Play it here! But it’s down until Jan 1, 2019. Thanks for liking me game so much y’all used up all the free hours!

fun game, though the robots keep taking my chocolate ’ ^’

I love the game but keeps freezing and freeze permanently,maybe is because of the hosting servers been not around me but instead,the game is gorgeous,first kind of its own seen multiplayer,i hope would be continued because i see a great future in it

Sorry, that’s a bug that I just now figured out was happening. I’ll try to fix it quickly.

I would be thankfully

Crash bug should be fixed! Phaser the game engine doesn’t like it when someone tries to load a texture outside of its game context. Whatever that means. 🤷

would it be possible to add a leaderboard for the most candy carried, or highest weight? and possibly a chatbox or simple emotes? I wanna say hi to the other feeders :3

A phone support would be thing

Love it! Are there only 4 sizes though?

5 sizes. The one you start at, and 4 more bigger ones.

I’m favoriting my ‘favorite’ suggestions as things to consider adding to the game once judging is over. If y’all favorite them too, it’ll be like a jank poll!

I gotta say this is probably my favorite weight gain game.
The multiplayer aspect gives it some replay ability.

As for suggestions i would recommend adding a basic emote system
and adding W.A.S.D as alternative movement keys.

This is really simple yet really good.

The most ambitious and innovative project submitted in my opinion. Its a fun little MMO and the feeding concept is interesting. The concept needs a bit more depth and general polish though.

When you said you were going to make an MMO, I thought you were kidding, but here it is.The concept is run and solid. Movement is a bit weird, but overall not too disruptive. Beyond the core mechanic, unfortunately, there’s not much more to the game, so you lost some points there. Theming was in title only, so got docked there too. This is an interesting framework for something much more fleshed out, however.

I would love to see extra art assets for this. Having a customizable character to play with friends would be great. Maybe text chat above your and other players head? I could see this being an really fun rp tool. Great submission!

If only this had some sort of end game, or just more game. and the movement’s a bit slow for 100

maby a chat system in the next update?
or a Discord Server? 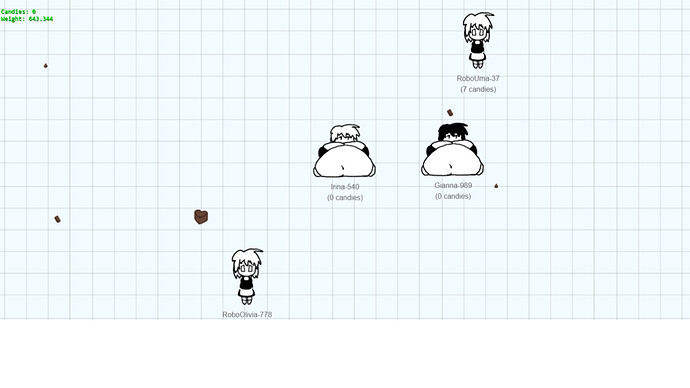 Hey, come hang out with me!