Parvinjaan has released a new version of this game without the underage characters:

A Piece of Cake (itch.io) - including English version

This thread mainly concerns the translation effort to create the English version. Current patch in this post.

Any bugs in the game need to reported on the game’s Discord, not here. The patcher doesn’t touch the game logic, so it cannot fix bugs. Of course if your problem is with the patcher, then those bugs belong here.

While I may be able to answer questions about how to play it, this isn’t my main focus as I didn’t write this game. I’d strongly suggest searching the old (locked) thread first, or joining the game’s Discord.

to answer questions about how to play it, this isn’t my main focus as I didn’t write this game. I’d strongly suggest

So is it possible to play an English version yet?

So is it possible to play an English version yet?

No, not yet. I haven’t started! I’ll post here once I have something.

its still great this game has been added again

I’ve made a first cut of the translation, and sent it back to Parvinjaan, hopefully it will be available to download from the itch page shortly.

after using the patch i keep getting this error "I’m sorry, but an uncaught exception occurred.

I always supported operations to make a game playable(like being able to READ it XD )! Good luck! I can’t read japanese so I can’t help(and the less discord I use, the better). But I hope something comes of this!

From the v0.15 changelog

after using the patch i keep getting this error "I’m sorry, but an uncaught exception occurred.

Was the exception in the patcher or in RenPy when running the game? A screenshot could be helpful. 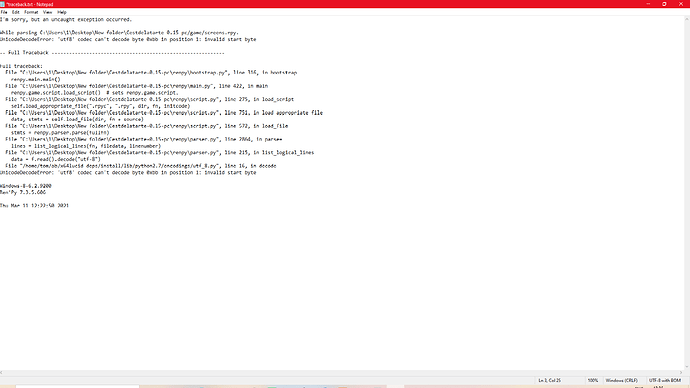 Do you mean when you unpacked the original game they weren’t UTF-8 encoded or after the patcher processed those files?

Does the game start correctly before you patch it (ie. in French)?

The first few bytes of the file should be in hex EF BB BF which is the UTF-8 marker. In Notepad (at least on Windows 10) it should say “UTF-8 with BOM” at the bottom right.

Sometimes the unzip of the original (or possibly the patching) can get messed up if your system has been changed to allow Japanese games to run (breaking non-English European languages). Alternatively, you may have an unarchiver that is not being very clever with the original content which was packed on a French system. I’ve not experienced any problems with 7zip.

How do i hmm change de lenguage?

@justafatass The original is in French. If you use the patcher above, then it’s all English. Hopefully the pre-patched version will be on the itch page shortly.

May I get some pointers figuring out just how the health system works? Seems no matter what I do my health just goes down and down each day.

I will note, despite seemingly patching correctly, there are some sections that remain unchanged, like certain events, and the names of jobs.

Yeah I did the quick and dirty language change to get some RPG maker games to run. What’s odd is that I made that change even before I played earlier versions of C’est de la Tarte with no problem. Though I now see that even my intel control panel is now entirely in Japanese, which wasn’t the case at the time.