Have you ever wanted to escort a ditzy, hungry girl across the world? Well, now you can with:

This game contains mostly stuffing with food inflation + burps. Small amounts of weight gain, with some more coming in the future. Roughly 20 hours of game-play has been made depending on how fast you mash that enter key to skip dialogue.

One character is your more standard fighter, however, his companion has been gifted with magical abilities. This magic is fueled by food she eats and digests in combat. She gains skills throughout the story and through your choices in events, you can set her on the path of purity or gluttony - with corresponding rewards. Along the way, you will ski preppy kids, steal bad guys food, market fancy goblin beer, and return some slabs.

Often times you will be presented with choices for a character to steal food or not. As this is a stuffing focused game, YOU WILL BE REWARDED FOR EITHER OPTION, so pick whatever option you think makes the most sense for yourself!

It is early in development so expect some bugs and please let me know if you run into them.

Update 14 - Lantrum War Part 1
So you wanted to continue the story? See how Emmie and the gang beat up EL and save the day? Well great!.. sort of. This next update is moving us toward the end game of the plot but full disclosure does not finish the story yet! Two major areas that get us right on the doorstep of the vile EL and his dastardly plot of world domination. This is equal in size to previous updates, well into two hours of content for you to enjoy 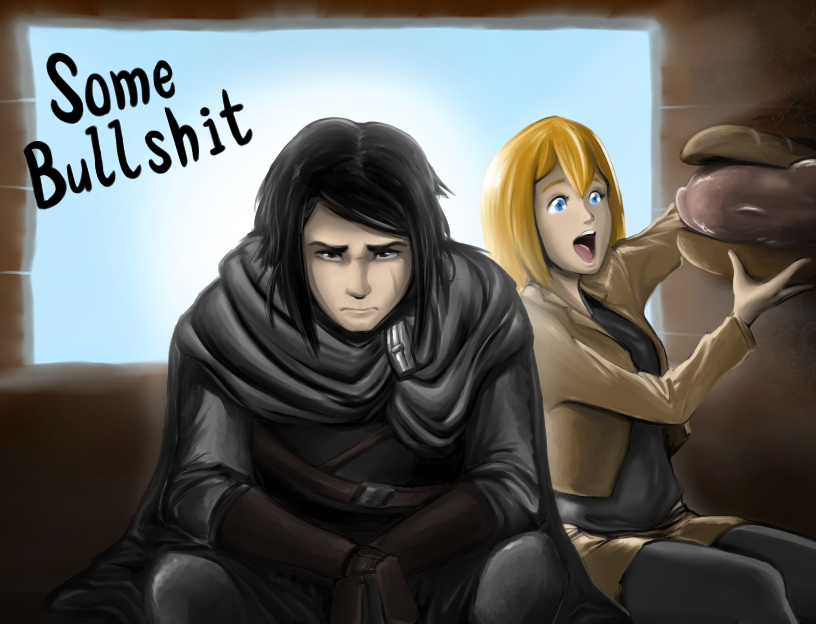 Some Bullshit by Nerds1

I apologize to everyone who was excited to see the end of the game. I really wanted to have one big release that finishes everything with a neat bow, but I worked really slowly on this guy in November and December. The holiday special also took some time, but the reality was I was lazy. There is a silver lining of course, in that while I was lazy about working on the game, Clinko certainly was not! I think we have added more art than any previous update and it isn’t even close. So we can all thank Clinko for not slacking like me.

The esteemed @thuasluhuall, who we never can forget, also has made some incredible sprites for this update and has been hard at work at some set pieces for the next. I am eager to show you all just what the mad lad has been working on. Get pumped.

Give them both a round of applause for making my game not look like shit.

Of course, a very special thanks to all my testers for helping make the game playable so quickly! Seriously, my beta’s are horrible, spoil stuff, and are very confusing. The game would be nearly unplayable without all your hard work.

Thanks for everyone’s patience! Please let me know if you run into bugs, the bug testers really tried to find most things before release, but it is very difficult to find all ways that my game can break. Also, if you are not into certain things in this update, suck it up! I’m not a massive fan myself, but let others have their time in the sun! I will broker no complaints!

Edit 1. Fixed several softlocks and Pro and Clara swimming in Ellie’s pond all the time. Also made the start of the game use the new rooms (it’s bad old scripting so nothing new there)
Edit 2. Fixed some broken sprite sheets, the cruise replay, and a softlock if you decide to ignore Emmie crying and run up some stairs in a specific spot (though you should be punished for leaving Emmie crying!)
Edit 3.&4. Sprite sheets that I missed and some other stupid things that I messed up. This is the final release as now I need to work on the new stuff.

Holiday Special for those that missed it. 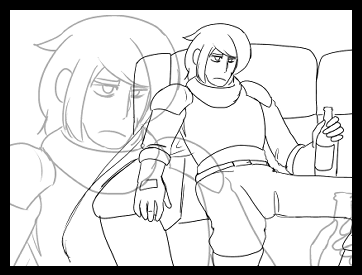 Some Bullshit Holiday Special by Nerds1

aight this is pretty tight. the writing made me chuckle, and i love ditsy hungry girl dynamic. Emily is great and i like how you managed to make hunger and eating relevant to her character. Ultimately I’m in it for the scenes. I’ve only been doing the glutton route because why the fuck are we even here for otherwise, but im curious to see how the purity route goes and if it scratches any itches. I like how the gluttony route so far has actual consequences and it makes it feel much more immersive. im all in man this is some good stuff.
I did find some bugs but they’re kinda nitpicky. the names on the menu are too long and get obscured by the stats, but i can live with it. sometimes during the scenes where you play as emily there are two portraits of her in the menu, like for the warehouse scene for example. Also in the jail segment, in the dungeon the back wall has no collision and you can just walk right on through.
Im still going through it but I’ve seen enough to know this is pretty great. Im hoping to see more of it! 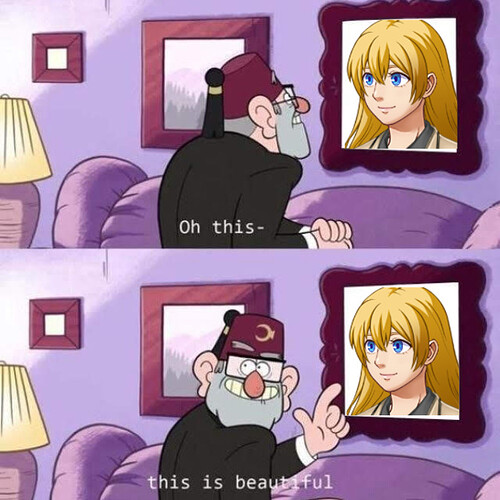 Thank you for your feedback. I should probably get to fixing those. A lot of the early game I was new to using RPG Maker, so I would do dumb stuff like instead of switching removing the fighter from the party, I would simply swap his sprite. As it goes on, especially after town/area 3, it gets more complex and hopefully better. Scenes also escalate as time goes on.

yea i just got past goblintown and im in the mountain area. I really really like the devour ability. im glad to hear that i still have some more to go.

After you finish the goblin town and you get the certificate, don’t forget you can go back to the previous towns to play a mini game with each bartender there. That will be a long running quest line throughout the game.

another nitpick bug, sometimes pro tag gets stuck in skiing animation instead of returning to the walking animation. unsure how to replicate. it happened after finding the dead body in the back country and leaving the storehouse after checking the crate. the bug self corrects tho. great music choices man this game has it all. 80s skiing montages, the man in gauze, cute hungry girl, goblin beer, always sunny, a proh tagonist 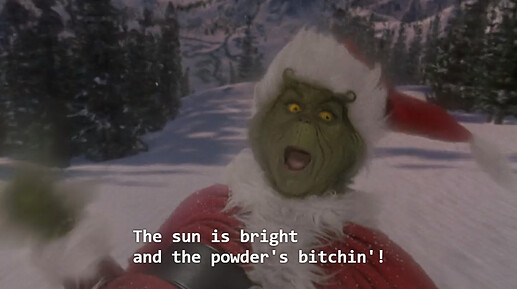 aight im done with the glutton run in the demo. fantastic stuff. one last nitpick bug - heading back to other areas after ski town results in constant snowing and wind blowing sfx. can’t wait for the next installment i really enjoyed this. never realized all those hours on ski free would pay off like this
tomorrow im gonna give the pure run a go next and see whats up. gotta be honest tho its gonna be hard to top glutton run as far i’ve seen

I will admit, right now the purity run is lacking. The main scenes you have for being a good girl are resist eating the towns stolen fish, not eating the warehouse food, and not drinking the bad barrel. Even then, the rewards are very very small for the second two I mentioned. I have some things I plan to implement, especially with the preppy kids food, but it isnt in yet. There is some small dialogue changes as well, but they are indeed small and dont impact that much.

I plan to expand this more for the next update.

Its… actualy good? Like, realy good, at least for RPG maker game. Of course its a shame that there is no weight gain content, but that is here is good. Jokes mostly land, characters are likeable and they even kinda change trought the course of the story. I espesialy like Pro, how he go from loyal guardian to sick of all this shit. I even dont hate most of the references, that pretty rare
So yeah, its probably first RPG maker game that i look forward to see updated. But name is some bullshit, its kinda dont fit, do you consider to change it?

Thank you for your kind words!
And yeah the name is something I would say when people asked me what I was doing on rpg maker on steam. I dont know what to call it yet, I will change the name when I do, because it’s pretty bad at the moment.

There will be WG stuff later in existing and new characters, just female though.

wuh oh found somethin weird during the pure run. i tried to do the marketing event in the fishing town and the minigame didn’t show up. it just went straight to game over. my sequence of events was

oh shoot another thing. i got the refillable keg and it seems whenever i try to activate it the game tries to load a missing audio file here’s a pic of the bug. 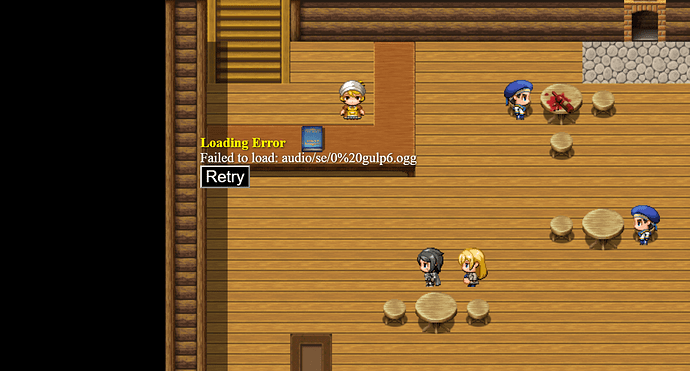 Aha! Would you believe you were the first person to ever pick that option? Seems everybody always wants poor Emmie to be bad. I’ll go through and fix the bugs soon, thank you for testing. I also think I know what broke the mini game, should be an easy fix

a picture of me picking the pure options 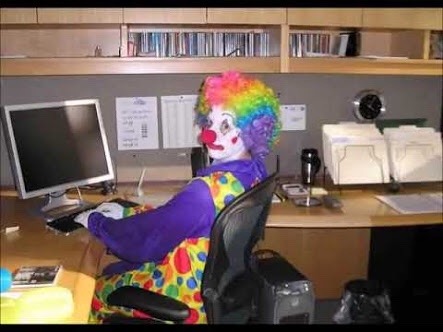 truly i walk a lonely road

Holy shiz dude, One of the best RPG maker games on here in a while lol

This game is off to a great start, having a party member who’s stomach capacity has to be converted into magic and constantly having to refill her is a good game mechanic. Would love to see an overstuffed negative side effect if you have her eat too much, maybe on her next turn she only can only choose digest and nothing else. The only issue I found is I couldn’t figure out the tablet/pillar thing after you break the bridge. No matter how many slimes I had her devour, could never get the second tablet

Hope the devour ability comes back in future updates

secret candy room? please tell me that is some mess up joke for them…

You have to fight slimes by the slime on the pedestal itself, it was a dumb way I set it up to count kills, that I will probably go back and fix. Sorry about the confusion.

Secret candy room because I couldn’t think of another reason why there would be more food after you just ate/burned down all the guards warehouse supply. But players earned a scene after the boss fight, so it was the best I could do.

purity run is complete. ski town was completely clean as far as i could tell.
i gotta say tho its nice to see Pro’s softer side to Emmie in the purity run. its nice to see Pro not get mad at every little thing we subject Emmie to. anyway good stuff my man, here’s hopin to your good health! im happy to wait as long as you need for whatever else you got comin down the pipeline! 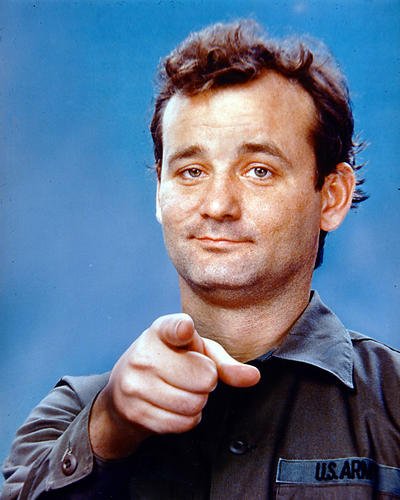