So I was taking a looksee at the japanese games linked here and decided to give ztranslate a try, since translator++ doesn’t translate everything depending on the project is coded. Unfortunately, ztranslate hasn’t had any notable improvements and only has a small translation space, which means several elements have been cropped which ruins the context of sentences.

Luckily, after looking up some guides, this was the best one so far: 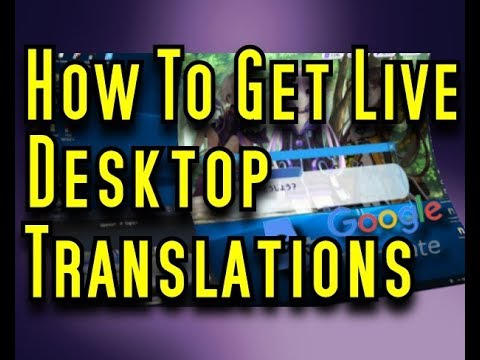 Not only does this have a readjustable “lens” for tuning the translation, it leaves the original text alone so you can double check with a dictionary. As for the downsides, you’ll have to drag the capture window over since it doesn’t do well inspecting every element in the window, misclicks may cause you to skip content, and fullscreen is impossible since you need both windows simultaneously. Using google translate like this also may invade user privacy, but that’s a drop in the bucket at this point. Overall I’m really impressed, because this can be used on any software without too much overhead, and even used on webpages if dropping the webpage link doesn’t work.

Has anyone else found a silver bullet to machine translation lately?

I’ve read complete VNs with Textractor, and that’s what I use when I need to catch difficult kanji in something that I’d otherwise need to hack open. I wouldn’t call it a silver bullet and it does require windowed screens, but it captures the text in real time and keeps scrollable log of everything displayed.

However, Textractor (or at least the version I have) doesn’t work with RPG Maker VX Ace for whatever reason. It’s not too big a deal in this context due to there being no VX Ace WG games as far as I know.

By the way, which WG-relevant games still need to be translated? I try and keep on top of the RPG Maker games out of Japan.

The game uses one or more plugins that don’t play nicely with Translator++. So while it will translate and run, progression is broken and you’ll be unable to raise your weight above 60kg.

Not a long ago i found a japanese weight gain game called “メイドさんの長期休暇” (translated as “maid long vacation”) from this person on twitter : https://twitter.com/3GPG93kDyAAWbKS there is an online version of this game on nico website : https://game.nicovideo.jp/atsumaru/games/gm15629?link=share_twitter here the new online version from the 19/01/2021 enjoy! Well here the download version https://mega.nz/file/tnhn3ALK#hgDjzVQDqenh7ikMkCIDeHR7NH-tCDUrYaOesPI3Gzs It’s an fast and easy to play gam…

I happened to find another new Japanese WGRPG whilst scrolling Twitter: The creator (Sheepboy) also posts on Pixiv I should note the game is made in WOLF RPG, which makes it a bit more awkward to manipulate than RPGMaker, so translation efforts would be more difficult.

So, I ran it through Translator++, it works, and so far no crashes(although I accidentally got the good end after four weeks when cheating some cash in) Although, sometimes the machine translations are hilarious, because in one of the scenes, Kilograms is replaced with kilometers. So the girls are arguing over how many kilometers they gained, this amuses me for some reason. I’ll post the translated version for people Some tips to help with the gain, you can ramp stuff up, and make the girl…

Well I didn’t see this game having a topic so I thought I make one so the people who played this can share what they know to any anybody new. but also share the game with more people. here were you can get a untranslated version of the game https://www.pixiv.net/en/artworks/80418004 and the mega file for the translated version of the game https://mega.nz/folder/1fhzxKQL#X13lwvEnrg7unBo4fdx5Vw Some wondering the translated name of the game, someone down here posted it but so it wont get lost …

A fat furry game from a Japanese artist Projects

Alright. Sorry about that. Is there at least a simple walkthrough to get me started? I’m really confused on how to play

Alicia’s armor can be found . If you’re talking about the first time she gains weight, check . Reminder though that there’s a very detailed guide included in the Mega within the readme. Give it a look if you have any more trouble in the future.

Working on doing a simple translation for this, so far it seems like a simple RPG, really easy leveling and cash gain, I think I messed something up when doing a first draft translation, so I’m doing a fresh install to see if the places I accidentally fucked up have the other characters you can get in it.

So, I have the original Japanese version, and included in it is a guide on how to get the endings etc. Apparently, if you talk to the nun and she says the warrior has an appetite increase of 27 or higher, you can clear the level 3 eating contest. If people are interested in the entire endings guide, also is there a way to collapse spoilers? I’ll delete this if the creator or Kitsune doesn’t want this in thread. Below, for ending capture

[English Translation] - The Witch and I (ぼくまじょ by @tuki_tarou) Projects

Re: the witch: I’m not going to alter the original game’s characters other than translate them. However, there are six more witches (and many miscellaneous ladies) planned, all with reasonable feeding calculations and some with major boss battles. I don’t like absurdly fast WG at all, but “Majo-sama” will not be the focus of my mod. Re: the grinding: trying to work on that with weapons and armor crafting from enemy drops; witchknives (received through events) allow you to cast magic, but othe…

two new bugs with this version: the confirmation for if you are ready to enter the school for the day pops up after class, rather than before it. while you can still work for points, you cant buy anything from shopkeepers (at least on the first three days). meaning its impossible to get food.

This is everything that springs to mind right now. Feel free to add to it, I’m sure I missed plenty.

There’s also another RPG using kurocazes’ art, but I can’t find any builds insofar. Currently hyped for that one.

Has anyone else found a silver bullet to machine translation lately?

This service you’ve found seems like a pretty convenient ultimate fallback since it can be applied to anything without limit, but as you say, it’s pretty invasive to the user experience, and worse IMO, it can’t be used to create a replicable final translated product.

Your “silver bullet” is to ideally not rely on MTL at all; it’s fundamentally a poor substitute for the intended experience. Of course, in cases like that applet the video was showing off, you’ve no choice in the matter, but if it’s an RPGMaker game or a hookable VN, you should aim to make it a community project and get an actual translator to go through the lines one by one (and in that case translator++ is probably still your best bet). There’s a handful of people on this forum willing and able, myself included. It’s the only real way to handle context-dependent lines.

I know you got a good point there given your great work on Feeder Fantasy, but seeing as the laundry list of games isn’t getting any smaller, and this was just an experiment of mine to see if an average person could break through the barrier. Ideally, the community should polish up the work once interest is developed, but only a few here actually have the skill to pass through without trial and error. Aside from handing out Japanese dictionaries like bibles, this was the closest solution I could think of, and it could help beginners actually process and apply with original context, unlike translator++ which guts out the text.

Maybe someday there’ll be a better tutorial for Japanese that solves this, until then MTL lets translators work on the hard hits while the experimental games get analyzed without wasting effort. Not to mention, not all games are RPGMaker with guttable code, and stuff like Two Beast or Not To Beast has no other alternative.